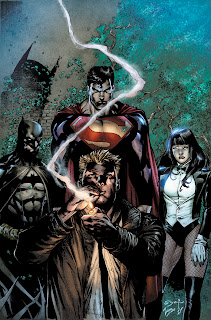 You have to love DC and their hilariously unwieldy titles. Brightest Day Aftermath: The Search for Swamp Thing picks up some of the pieces left by the 24-issue series Brightest Day, which itself picked up many of the pieces left by the eight-part miniseries Darkest Knight, which was itself spun off from several years' worth of plot developments in Green Lantern. With me so far? (And comic companies wonder why their titles don't sell like they used to...)

The basic premise of this three-issue miniseries is actually pretty simple: Swamp Thing, a green elemental creature with magical powers that has been missing for many years, appears to have returned to Earth. Rather than the old benevolent Swamp Thing, this new incarnation appears to be destructive and potentially very dangerous. English magician John Constantine heads off on Swamp Thing's trail, hoping to track down his former friend and find out what has gone wrong. On his way he begins to encounter a group of superheroes including Batman and fellow magician (and, it turns out, ex-girlfriend) Zatanna.

On its own merits, Brightest Day Aftermath: The Search for Swamp Thing (maybe I should save time and just call it BDA:TSFST, but even that's a mouthful) is a relatively enjoyable and harmless bit of superhero-based entertainment. The art by Marco Castiello and Vincenzo Acunzo is fairly nice to look at. The script by Jonathan Vankin is serviceable but not exceptional.

Of course for most long-time readers of DC Comics, opinions about the comic itself will likely take second place to what this miniseries represents. While the characters of Constantine and Swamp Thing originated in the DC Universe alongside Batman, Wonder Woman, Superman et al, they've spent the vast majority of their fictional lives living in the mature-readers offshoot line DC Vertigo. Constantine's own title Hellblazer has been in pretty much continuous publication as a Vertigo title, while Swamp Thing has come and gone through a series of relaunches and spin-offs, some successful and others rather dire.

The point is that these characters are now a very long way away from their DC Universe origins, and to suddenly finding themselves rubbing shoulders with Batman causes a sort of literary whiplash that hurts the brain and deafens the senses. It's a stupid idea. Constantine in particular is a character who thrives in a mature-readers environment: he's allowed to swear, he's allowed to be the amoral, self-centred, highly destructive bastard that he is. Now he can't even say bastard. While he returns here, DC are thankfully keeping his Vertigo series running, so it's not like we can't read the proper Constantine - it just makes it so inexplicable that DC need to kickstart an all-ages version at the same time.

Based on this first issue, the all-ages version isn't very good either. For one thing he says 'bloody' an awful lot - obviously it's one of the few words of his vocabulary he's still allowed to say. For another, this character so well defined over the decades as a Scouser now speaks like a Cockney. It's like Vankin backed up a truck and unloaded a metric tonne of Guy Ritchie movies over him. He even calls someone a 'geezer'. Pick up a copy in your nearest comic shop and read a few of Constantine's lines using Jason Statham's voice in your head. Go on, give it a try. You won't get that voice out of your head for the rest of the comic.

Of course in September Swamp Thing gets his own DC Universe title, while Constantine joins the hilariously bizarre Justice League Dark alongside Madame Xanadu and Shade the Changing Man. I'm all for DC mixing up their superhero line and making a big line-wide relaunch - I'm just not sure it's worth them pillaging their own Vertigo line in the process.

If you're a big fan of Constantine or Swamp Thing, you're probably going to pick this comic up anyway just to see what they've done with it. If you're not, I'm honestly not sure there's anything here worth having a look at.
Posted by Grant at 2:16 PM