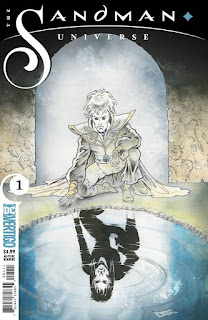 Imagine the thinnest of stories draped over a sales catalogue; that is essentially what you get from Sandman Universe, a fairly expensive launch for DC Vertigo's new line of fantasy and horror comic books based on Neil Gaiman's famous series The Sandman. In the Dreaming, the mystical world where everybody from humans to gods go to dream, something is going terribly wrong. The search to find Daniel, the Dreaming's immortal ruler, takes Matthew the raven across worlds and to the set-ups of a raft of new stories and adventures.

I completely understand DC's desire to revisit and expand the world of The Sandman. They are launching with a couple of new and old series: The Books of Magic, The Dreaming, Lucifer, and House of Whispers. To be honest, all four look fairly promising in a 'could swing either way' fashion. Also being honest: each little prologue feels exactly like the sort of five-page preview that DC releases online every week. So is there entertainment value here? Absolutely there is. Does it also feel like a bit of a cheap rip-off. Absolutely it does. A hell of a lot like one. How desperate are you to read these new books? (2/5)

Darth Vader continues to lead the Inquisitors in hunting down and murdering all known surviving Jedi. This feels like a neat little one-shot following the villains around in their business, and certainly helps to solidify the characters and the general thrust of this story arc. Camuncoli and Orlandini's artwork continues to get better and better, and is certainly a whole level of quality above where they started. That it ends on an apparent cliffhanger is a little odd: it's less an exciting hook than a mystifying one. What the hell is actually going on? (3/5)

I am not typically a reader of Suicide Squad, but must make an exception as it joins a five-part Aquaman crossover - and I do read Aquaman. This is a solid start to the storyline, with Taskforce X getting dropped in a submarine and infiltrated into the recently surfaced city of Atlantis. The focus in this issue is definitely on the Suicide Squad side, but it will be interesting to see how the story shifts when the focus is more heavily on Aquaman. The promise is there, and so is the dramatic hook, but how will things be fulfilled in future issues is yet to be seen. (3/5)

The Earth has been dragged into the Phantom Zone by some unknown means, leaving the whole planet in peril and Superman lost at how to work out what happened and how to get the Earth out again. That's not even his biggest problem either: Rogol Zar, the destroyer of Krypton, is trapped in the Phantom Zone too, and without access to the sun Superman's powers will very quickly go away. Good scripting by Brian Michael Bendis and great artwork by Ivan Reis and company make this a properly great new Superman story arc. I'm still not entire sure of Bendis' work on Action Comics but I am all in on Superman. (4/5)

A critical sword duel. An unexpected jump in time. This viking saga is beautifully presented. Brian Wood - a dab hand at a viking story - tells a wonderfully simple and stark story about a man's hunt for revenge and his non-verbal, long-abandoned young daughter. Mark Chater's artwork does a wonderful job of presenting the barren landscape and visceral combat of 10th century Scandinavia. This issue employs a great split narrative that only reveals itself in the final page. What I really like about Wood's writing is that while he writes stories about vikings quite a lot - in Northlanders, in Black Road, and now in Sword Daughter - is that the tone always changes. It's also always great. (5/5)
Posted by Grant at 10:28 PM