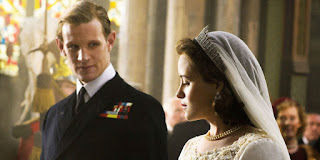 I have never had a particular interest in the British royal family. I don't actively dislike any of them, but I do prefer republics to constitutional monarchies, and I have never supported the creepy tabloid culture that surrounds them like an unwanted parasite. As a result I did not rush to see Netflix's big-budget historical drama The Crown, that begins in the final years of King George VI's life before focusing soon into the series on his daughter Queen Elizabeth II.

That has been my loss. It turns out, from the debut episode at least, that The Crown is one of those rare television series whose quality is so pronounced that its subject matter seems almost entirely irrelevant. It is a series about people: their wants and needs, and their struggle to transcend the obstacles that lie in the way. The characters are richly drawn and uniformly performed to the most remarkable degree of quality. If you have not seen any of it yet, I strongly encourage you do give it a try. The hype is there with reason.


There is a remarkably grand scale to the episode, particularly when it comes to Princess Elizabeth's marriage to Philip Mountbatten - not yet a Prince, but I expect a future episode will cover that. Likewise scenes set up in the royal family's Balmoral estate have a beautiful texture and scale to them. You can certainly see where the budget went: this is a visually beautiful series, and extremely well shot.

The series wavers back and forth in terms of historical accuracy, but that is to be expected in a historical drama. Opinions will differ on whether a film or TV drama should side with historical accuracy or dramatic potential; The Crown seems to be charged a course somewhere in the middle of the two. That honestly strikes me as the best approach. The casting is superb in terms of visual accuracy. Matt Smith makes for a wonderfully convincing Philip, and he brings along a superb ambiguity. Sometimes he seems genuinely in love with Elizabeth. At other moments there's a sort of cynicism to the character. Most often it's something in between the two.

A lot of publicity was given to John Lithgow's performance - ultimately award-winning - as returning Prime Minister Winston Churchill, back to 10 Downing St after five years in opposition. It's most effective, but is admittedly a little mannered. The real Churchill has been regularly pushed to the point of parody in pop culture, and The Crown doesn't quite manage to escape that impression. Claire Foy seems to get away with the opposite as Elizabeth: she nails the voice but does not exaggerate it, and she manages to develop a three-dimension character that presents the Queen as a woman more than as an icon.

The absolute highlight for me, however, is Jared Harris' incredible turn as George VI. He dominates this first episode so much that anyone without a passing knowledge of history might assume he was the star of the entire series. We first encounter him coughing blood into a toilet bowl: he has lung cancer - an ailment that his doctors have shockingly decided not to tell him about. Even after receiving an emergency lungectomy he remains no wiser to his perilous condition. Harris has perfected George's legendary speech impediment, which colours the character without ever distracting from it. His is a tragic story in this episode, but it plays out with moments a wit, intelligence and tremendous dignity.

Television drama just seems to be getting better and better. The Crown - from the first episode, at any rate - is proof positive of that.
Posted by Grant at 9:33 AM