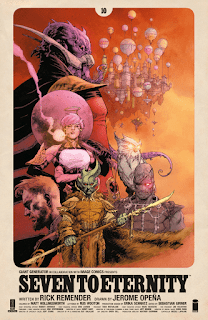 Seven to Eternity returns after a break with its 10th issue. I am happy for the book to take its time, because the intricately detailed artwork of Jerome Opeña must take an absolute age to compose - and I'd rather it look great that come out on a monthly schedule.

We pick up where we left off, with Adam Osidis having betrayed his companions to rescue the Mud King. Now they travel towards the mysterious Springs of Zaal, where Adam may finally receive a cure to the disease that is slowly killing him. That journey is interrupted by pirates who descend upon them from balloons.

It isn't just the artwork that makes this book so strong; it's the rich and distinctive fantasy world that Rick Remender has developed with which to tell his story. It's familiar in many respects, but peppered with superb original concepts and cultures. Want a great fantasy comic book? Look no further. (5/5)

Mr Freeze is on trial for a triple homicide. He was caught by Batman, who also picked up critical evidence that the police coroner didn't catch. The entire appointed jury are convinced he's guilty, save one: Bruce Wayne. It is such a tremendously clever idea for a storyline, and while some readers may not like the idea of an entire storyline essentially being a courtroom drama (I think it's outstanding, personally), the writing and Lee Weeks' excellent art cannot be faulted. It's great to see a comic series so old still finding new angles. (5/5)

The crew of a salvage spacecraft are confronted by a growing and dangerous alien organism on their ship, with no means of escape. Or, if we're to be blunt, Alien gets remade as a comic book with the serial number filed off. To Niles' mild credit, things this issue take a more Lovecraftian turn before reaching a fairly fresh conclusion that I did not see coming. Is it enough to save the overall book? Maybe. Certainly when read altogether as a graphic novel it will feel more of a cohesive piece than when broken into individual installments. In serialised format it was hugely frustrating with a rather rushed climax, but at least it ended well. (3/5)

James Tynion IV takes over writing Justice League to jump back and reveal the machinations of Lex Luthor from his side of the story. It's a great idea for several reasons: firstly, it extends that horror show cliffhanger (Superman and Martian Manhunter have been taken over by Luthor and the Joker, respectively) for a whole extra month; secondly, it gives more depth to the new Legion of Doom and its members; third, it expands the story generally. It looks and reads brilliantly. This is a great run of Justice League, one designed to be an absolute fan-pleaser. (4/5)

There can be peace between New Genesis and Apokolips once and for all. No more soldiers never ever die again. The simple price for such an arrangement? That Scott Free give up his infant son to Apokolips for good. As with his Batman issue this week, Tom King presents a thoughtful, dramatic and dialogue-heavy drama. Mitch Gerards excels at illustrating this kind of story, and enhances the trauma of such a choice brilliantly. With only one issue left to go, it is hard to see Mister Miracle having a happy ending. I shall look forward to issue #12 with a wonderful sense of dread. (5/5)

The big shock in this issue comes after the story ends: next month's issue #12 is going to be the last issue of Scales & Scoundrels for an indefinite period. That's terrible. This has been one of the absolute best comics of the year, with elegant and emotive artwork and clearly developed and hugely entertaining storylines. No reason was given - sales is a possibility, with Comichron estimating about 2,600 issues shipping in June - but hopefully the series can continue in some form soon. It's simply too damn good to go to waste. This penultimate issue sees the dwarf Dorma return home for the first time in many years, only to find her family and friends in danger. It's just such wonderful stuff. (5/5)
Posted by Grant at 2:20 PM