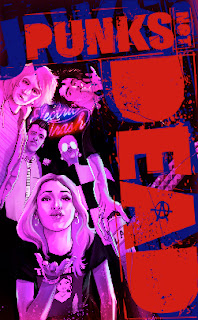 Fergie is a Northern English teenager who doesn't know his own supernatural history. He's currently being haunted by a ghost who appears to be Sex Pistols vocalist Sid Vicious, and being hunted down by a distinctive British secret agent who is a victim of supernatural forces herself.

Punk's Not Dead is a great comedy-drama comic by writer David Barnett and artist Martin Simmonds. It feels like a late 1990s DC Vertigo book, which is a near-guaranteed winner for me. I love that period of American comics history, where my favourite books tended to be by names like Morrison, Milligan, Ellis, and Ennis. The English setting, the intricate back story infused by history or pop culture, the mature tone, and the great art all make for a wonderful throwback. This sixth issue is one of the best so far, and provides a lot of much-needed backstory and context. It also wraps up the first story arc, with a collected trade paperback coming out in October.

That's why I'm praising it now: if you haven't been following this book already, and you're of a similar comic-reading vintage to me, it is well worth heading to your local comic shop and pre-ordering the paperback now. It's a fabulous book, and one of my new favourites for 2018. (4/5)

Under the cut: reviews of Action Comics, Star Wars: Doctor Aphra, and The Terrifics.

With Lois and Jon missing away somewhere in deep space, Clark continues to maintain his normal routine despite his concerns and his loss. While he investigates a growing spate of arson attacks, he is being investigated himself by the Daily Planet's new gossip reporter. This is a solid issue, introducing the series' new set-up and a new mysterious villain waiting to be properly revealed. At the same time it feels a little weird: Brian Michael Bendis is writing both Action Comics and Superman, and that feels like too much of an overlap. It denies us the chance to see another writer's take on the Superman character. Still, Patrick Gleason's artwork is tremendous here. (4/5)

Attempted prison breaks, dangerous alien secrets, an ex-girlfriend and a conflicted new romantic attached: Doctor Aphra continues running apace. One of the real selling points of this book is the extra amount of story and complexity added each issue. For a book focused on one protagonist, with a group of supporting players orbiting, it is surprising just how much Si Spurrier is squeezing in. The loose attachment to broader Star Wars continuity makes it a joy to read for long-time fans, while the LGBT edge adds a well overdue element into the franchise. Sure it's a tie-in book, but it's also a regular joy. (4/5)

There is some particularly clever panel layout work being done on this book. While it does go against my usual instincts - a low panel count means a low story count - it is quite simply so beautifully inventive that I have to applaud. Of course the actual story continues to coast along: I like the characters, the artwork is fine, but the actual tale being told feels well beneath Lemire's talents. I suspect it's going to scuttle the book in the long run: it's simply not exciting, urgent or original enough. (3/5)
Posted by Grant at 7:58 PM