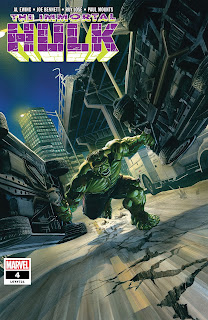 Journalist Jacqueline McGee is on the hunt for a story: the apparent resurrection of Dr Bruce Banner, aka the Incredible Hulk. Joining her on her assignment this issue is Walter Langkowski, better known by his own alter-ego Sasquatch and also Banner's former college roommate.

We're now four issues into The Immortal Hulk. The first three issues have had an almost anthology-esque structure to them, with each story using a darker, more threatening version of the character to tell horror stories. This issue feels like a much more conventional superhero comic, firming up an ongoing narrative and reconnecting Banner and the Hulk back into the Marvel Universe. It is a perfectly solid approach, but I do hope writer Al Ewing can strike a balance between the horror stories and the superhero ones. The first three issues were just too good to lose. Joe Bennett provides excellent illustrations with inker Ruy Jose. (3/5)

Under the cut: reviews of Doctor Who: The Seventh Doctor, Giant Days, and Green Arrow.

Doctor Who: The Seventh Doctor #3

The world is in danger from an alien-triggered holocaust and it's down to the Doctor, Ace, and the Intrusions Counter-Measures Group to save the day. This has been an entertaining three-part romp, and an absolute gem for nostalgic fans of the late 1980s, and Sylvester McCoy's three-year tenure as the Doctor. Christopher Jones is the perfect artist for this sort of comic book: he has a gift for depicting real-life actors in their television roles, and without making things look overly photo-referenced or stiff. The backup strip by Richard Dinnick goes out on a higher note than earlier issues, particularly when it comes to Jessica Martin's artwork. (Enjoy the alternative cover too: which is based around TV serial "The Happiness Patrol" for some reason.) (4/5)

Daisy's life in thrown back into disarray when her German ex-girlfriend Ingrid burst back on the scene. Can she resist her charms a second time? Plus there's a Halloween party fast approaching, and insufficient time to find a costume. After more than 40 issues, Giant Days now just seems like a warm and comforting blanket of a comic: loveable characters, a bit of soap opera drama, and plenty of snappy dialogue and comedy. It's pretty much the most consistent and reliable comic book out there. (4/5)

While Green Arrow tries to connect better with Arsenal and Black Canary, a new vigilante named "the Citizen" begins stalking the city's rich and immoral to teach a permanent lesson. This is a fairly good DC superhero issue: neither awful nor brilliant, but breezily entertaining in a pleasing but unmemorable fashion. It's what should count as the average for superhero books, but of course it never is. At the moment this storyline seems a bit overly familiar. I'm keen to see if it breaks into a more interesting and original direction next month. (3/5)