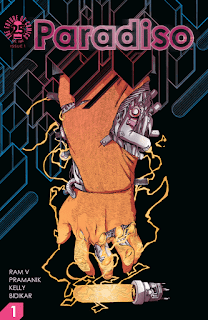 Jack Kryznan arrives outside the post-apocalyptic city of Paradiso, looking for a way inside. He brings with him a mysterious device that everybody - once they learn what it does - is going to kill to get it into their possession.

This new science fiction monthly is certainly the more mysterious debut of recent years. There's clearly a story here. There's clearly a lot of work done in terms of world-building that will undoubtedly pay off in future issues. The artwork by Pramanik is busy but eye-catching. The problem is that it really is all a little too mysterious; it's kind of hard to know what's precisely going on here.

In the end you're being asked to trust writer Ram V and assume that things will become clearer in the future. That's actually a big ask; there are a lot of independent and creator-owned books getting published these days, and they're all competing for readers. If you're really craving a cyberpunk-come-post-apocalyptic title, by all means check Paradiso out - but be prepared to work a little for your entertainment. (3/5)

Under the cut: reviews of Doctor Strange, Faith, Giant Days, and Spider-Man, plus a bonus review of November's issue of Eternity.

Stephen Strange is no longer Sorcerer Supreme: that role has fallen to the Asgardian trickster Loki. Instead Strange is moonlighting as a veterinarian, using his magical abilities to simply ask animals what it is that hurts. It's a weird set-up, and while it works much more successfully in this second issue of the story arc than it did in the first, I'm still not quite sure what sort of story Donny Cates is attempting to tell. It's fun, and regularly funny, but I'm not yet 100 per cent onboard. (3/5)

I am not a huge fan of Christmas specials, which when it comes to superhero comics feel a bit like an excuse to fleece the readership rather than tell an interesting story. I am however quite a fan of Valiant's superhero Faith, aka Zephyr, and Valiant aren't your typical superhero publisher. It seemed worth taking a shot. It turns out that this is a pretty fun one-shot with quite a few barbed comments to make about the commodification of children's entertainment. The artwork is great, by Portella and Kim, and it's nicely coloured. It's not a must-read, but it is an enjoyable - and enjoyably silly - little story. Faith readers won't feel ripped off. New readers might want to pick up the first volume of the trade paperbacks instead. (3/5)

Esther goes into crisis mode as Susan and Daisy enact their plans to move out. I'm rather surprised at just how long John Allison is stretching out this break-up storyline. It's still delivering the goods, mind, which is testament to how engaging his writing is. Warmth, comedy, you know the drill at this point; Giant Days simply keeps delivering its comedic soap opera on a month-by-month basis. It's not quite 2017's best comic book, but it is a strong contender for its most consistent. (4/5)

The all-new Sinister Six continue preparing for the heist of the century, while Miles continues to have doubts over his future as Spider-Man. The story does not progress too far this month - Bendis' classic drawback - but it is well-characterised and filled with beautiful dialogue. It still feels a bit like Marvel made a mistake is shunting Miles Morales over into the Marvel Universe proper; all of this introspection would carry more weight if he was the only Spider character around. (3/5)

Finally, here's one I overlooked for 29 November...

Divinity and Mishka have left the Earth in search of their kidnapped child. With characters like Ragad the Unstoppable, Doctor Tear and Atom-13, it all feels rather like a lost cosmic superhero book from the 1970s. Even Trevor Hairsine's pencils and designs seem to support that style. There are lots of weird names and places thrown at the reader, and while none of it carries much dramatic weight there is a sense of weird fun about it all. This is a very different miniseries to the Divinity books that preceded it. (4/5)
Posted by Grant at 9:21 AM