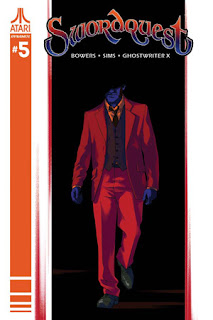 Swordquest has been one of the big surprises of my comic-reading year: an adaptation of an Atari 2600 videogame that came from a right angle and told an unexpected and inventive story about a terminally ill gamer, an unfinished competition, and a planned heist at a retro-gaming convention. As it went on the book made a shift from realistic and light-hearted crime book into an actual fantasy, which I was prepared to run with because I'd enjoyed it all so much.

Sadly when the time comes to tie everything together in a final issue, Swordquest stumbles and falls. The art and colours by Ghost Writer X remain solid and enjoyable, but they work best with a relatively mundane, realistic setting, and don't do anywhere near as well with the fantasy elements. It is the script by Chad Bowers and Chris Sims that actually causes the book to collapse. Everything feels rushed, causing the issue to feel less like a conclusion and more like a set-up to a sequel miniseries or ongoing book. It leaves a bad taste in the mouth.

I'm sure some readers will enjoy the fanciful manner in which the book concludes. I found myself longing for the grounded tone of earlier issues. (2/5)

Under the cut: reviews of Batgirl, Giant Days and X-O Manowar.

Batgirl and Nightwing move in on the Red Queen, in a case that goes back to when Barbara and Dick were teenagers. The balance between past and present is excellent here, and Hope Larson has absolutely nailed one of the most popular tropes in Batgirl comics: the unrequited, awkward love between Barbara Gordon and Dick Grayson. I don't want them to ever have a happy ever after, because the tension between them is too effective to ever break. It'd be like Moonlighting or Friends: the end result would be miserable for the readers and they'd just have to break them up again. I continue to dig Chris Wildgoose's art style, which is that slightly exaggerated clean style that I enjoy the most in superhero books. (4/5)

It's a trip to London for Susan, Esther and Daisy to celebrate the Christmas season. This is a fantastic self-contained issue with which to introduce new readers to the wonderful glory that is Giant Days. Guest artist Jenn St-Onge brings her own style to the characters, but John Allison's script is straight-up business as usual. I adore this comic. It's always enjoyable to read, filled with humour and genuine warmth, and plenty of moments to recognise from my own time at university. (5/5)

"Emperor" comes to its conclusion as Aric discovers the full price of overthrowing the Cadmium Emperor who ruled the planet Gorin. Now as each formerly subjugated civilization rises up to war with one another, the world he fought to free is falling apart around him. This is not the end of Aric's rebellion that I expected, and the book is all the better for it. Beautiful epic storytelling combined with strong dialogue and stunning artwork helps to continue making this volume of X-O Manowar one of the best comics of 2017. (4/5)
Posted by Grant at 10:11 AM