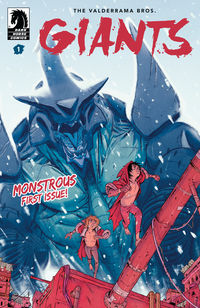 Zedo and Gogi are two boys living underground beneath the ruined wreckage of human civilization. Down below, rival gangs rule the streets. Up above, the Earth is dominated by giant monsters. When Zedo and Gogi earn the chance to prove themselves worthy of joining the "Bloodwolves" gang, they take it up without hesitating - but it does mean venturing across the city limits, and into the territory of the giants.

Fans of post-apocalyptic drama and giant monsters are going to have a ball with Giants. It marks the debut of Spanish brothers Carlos and Miguel Valderrama, and based on their work here they have a long and successful career ahead of them. This is a smartly plotted first issue. It introduces the setting and the characters with great effect. It's hugely enjoyable to read.

It has a lovely art style as well: there's a lot of motion in the art. It feels energetic and frantic. It's subtly coloured too, so that nothing ever feels overwhelming or overly busy. I cannot think of many comic book debuts that feel so slickly presented, or so immediately enjoyable. (5/5)

Under the cut: reviews of Action Comics, Batgirl and the Birds of Prey, and She-Hulk.

Thrown by the revelation that his father may have survived the destruction of Krypton, Superman has used the Flash's Cosmic Treadmill to head back to the time before his home planet was destroyed - with Booster Gold hot on his heels to prevent a history-changing cataclysm. It's great to see Jurgens writing both Superman and Booster together again, and following a fairly underwhelming lead-in from recent issues this instalment really picks things up. This is old-school DC Comics adventure; I love it when we get that. (4/5)

Batgirl and the Birds of Prey #17

Batgirl, Batwoman and Harley Quinn have been captured by Patient Zero, whose plan to kill off all the men in Gotham City with an engineered virus nears fruition. Meanwhile, half the remaining female characters of the DC Universe are out on the street looking for a way to save the day. This storyline feels like it should be stupid as all hell, but weirdly it works. On top of that it's tremendous fun to see a Birds of Prey that doesn't just include Batgirl, Black Canary and the Huntress, but also Wonder Woman, Harley, Batwoman, Poison Ivy, Catwoman, Orphan, Spoiler, Gotham Girl, Lois Lane and Amanda Waller. I'm also impressed at some of the finer details; the Bensons note that not all the people in Gotham with male biology are men, which is an important touch. (4/5)

Jennifer Walters has been kidnapped by a deranged She-Hulk fan named Robyn, who has been working on the instructions of the leader. Now they are putting their plan into effect: kill Jen, and give her powers to Robyn. Some nice use of flashbacks help to make this issue a little more complex, and add some character depth. It also brings back some of the trauma and PTSD that was making Jen such an interesting protagonist in this volume. This is the best issue of Tamaki's Hulk/She-Hulk since the original arc. (4/5)
Posted by Grant at 9:06 AM