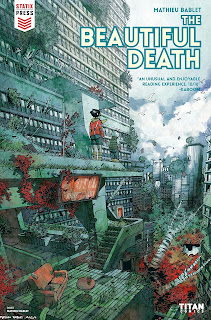 The world has ended, with almost all of humanity gone and the Earth populated by strange alien insects. Three human survivors wander through a vast, empty city in search of both food and other people. Now the three men have met a mysterious woman, and everything looks set to fall apart.

The Beautiful Death is a strange, somewhat surreal post-apocalyptic drama. It has an arresting sort of dream-like style to it. Explanations have, to date, been in pretty short supply, but the air of mystery that leaves makes it all the more intriguing.

The real selling point is the artwork. Bablet has a slightly unusual style, giving his characters a distinctive angular look. The backgrounds and cityscapes are beautifully detailed, and it is all coloured in a typically French subtle style. Add in the lengthy page count per issue and this is a hugely addictive and enjoyable read. (4/5)

In the aftermath of "The Oz Effect", Superman struggles to reconcile the villain he recently faced with the father he never knew. The further he investigates the claim that Mr Oz was in fact Jor-El of Krypton, the more it becomes clear that someone somehow has changed the course of history. This is a great bridge between one major story arc and the next, tying the events of recent issues more closely into Doomsday Clock and the future of the DC Universe. Ironically, this issue is a much stronger and more dramatic work than the story to which it acts as epilogue. (4/5)

While Copperhead's temporary police force keeps looking for her, Clara is a prisoner of her criminal ex-husband and his new girlfriend. Backstory is revealed at last: Clara's past, her true relationship with her son, and precisely how she can to marry her husband in the first place. That makes this issue of Copperhead more entertaining than some of the other more recent ones, but it is still a book in mid-stagger: Drew Moss' artwork isn't quite up to the standard of departed artist Scott Godlewski, and the story feels as if it has lost a bit of momentum and focus. (3/5)

In a brilliant act of tying threads together, James Tynion IV pulls up elements from all of the Detective Comics storylines since he started. Batman's vigilante team, Spoiler's departure, Tim Drake's temporary disappearance, Anarky, the Victim Syndicate - the gang, as they say, is all here. For an issue that is essentially stacking dominoes behind one another, there is plenty of drama and character work to enjoy. Joe Bennett and Sal Regla's artwork is solid enough, but Jason Wright's moody colours really lift it. (4/5)

Gerard Way's fanboyish tour through Grant Morrison's back catalogue continues, and it is an approach that - if it continues for much longer - is going to cripple and likely end this book. There is not enough new here. Not only does it ape the style and tone of Morrison's acclaimed Doom Patrol run, it actively mines back issues for its stories and characters. This issue is a case in point: bringing back the Brotherhood of Dada is a lazy creative choice, even remixed a little. I don't need to see Morrison's work re-done. I want to see what new ideas Way can contribute by himself. Those elements that do feel new really leap off the page. Meanwhile Nick Derington and Tom Folwer's art is wonderfully cartoon-like and just on the right side of goofy. Tamra Bonvillain's bright, rich colours absolutely nail the tone - misguided or otherwise. This issue is enjoyable, but it's also disappointing. (3/5)

What starts off as a seemingly throwaway piece of fluff takes on a fairly sharp, dark tone by the end. There is an impressive shift in genre here from wacky comedy to fairly ominous drama, and it's enough to push this issue of Rat Queens up from a reasonable three out of five to a solid four. It's fair to say this book staggered a little as it went through a run of artists, but Owen Gieni is settling down nicely. Kurtis J. Weibe's scripts look set to settle down at last as well - so far this volume he has been emphasising silliness and whimsy over drama, and it's good to get that balance back. (4/5)
Posted by Grant at 8:41 AM