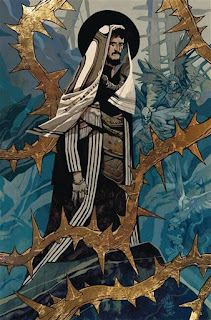 Since childhood I have been fascinated by Judas Iscariot, the man who betrayed Christ to the Romans and led to him being crucified. He strikes me as a complicated figure: a traitor, yet one whose betrayal enables the entire Christian religion to unfold. If he was destined to betray Jesus, then how can he be fully culpable for doing what he was always going to do? It's fertile creative ground, which has famously been sowed before in The Last Temptation of Christ, and now the same ideas circulate through Judas, a four-part miniseries by Jeff Loveness and Jakub Rebelka.

It's rare to see a theological book published as a mainstream comic book, but Judas is well worth the read. It looks outstanding, thanks to Rebelka's clean, haunting artwork. It also digs into Judas' character and backstory, while utilising a clever non-linear storytelling style. You absolutely don't need to be religious to enjoy this issue; I'm not, and it's one of the best debut issues I have read this year. This is an excellent set-up for an intelligent, literate dark fantasy. (5/5)

Under the cut: reviews of Daredevil, Detective Comics and Port of Earth.

Wilson Fisk, alias the Kingpin, has been elected Mayor of New York City. Now Daredevil is on the run from the police, and seemingly powerless to stop his arch-nemesis from controlling the very city Daredevil has pledged to protect. The bulk of the issue is a well-paced and illustrated chase across the city rooftops, with Daredevil on the run from the NYPD. The final scene, however, pushes this issue into a whole new level. Issue #597 cannot come quickly enough. (5/5)

And everything begins to fall apart. Tim Drake is enacting his own master plan to protect Gotham City, and it's a plan that worries Jacob Kane - not to mention the city authorities. Clayface prepares for his treatment that may remove his shape-shifting powers for good. The Victim Syndicate waits in the wings for Batman's grand vigilante experiment to fail. There is a wonderful sense of rising dread in this issue, and things suddenly become to go wrong with a domino effect. Joe Bennett's art is excellent, although a few of the pages get a little confusing due to unclear panel layouts. (3/5)

In the near future, an alien business consortium has come to Earth and successfully negotiated for a spaceport to be built in return for new technologies. The spaceport is for alien use only: the aliens only transit via the port and do not venture outside. Humans, meanwhile, cannot enter the port. On the eve of a major negotiation, an unregistered alien has broken quarantine and two human security officers head into the sewers to hunt it down. This series is based on a great premise, and Mutti's artwork keeps it all feeling nicely grounded and realistic. Depending on how the story expands from here, it could become a great science fiction miniseries. (4/5)
Posted by Grant at 8:57 AM