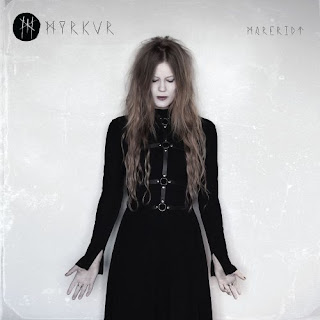 Myrkur is not a band but an alias: used by Danish musician and folk singer Amalie Bruun to separate her heavy metal works from the rest of her compositions. She released her first album as Myrkur anonymously in 2015; while her identity has since been leaked to the public, she has kept the pseudonym for her 2017 follow-up Mareridt (the Danish word for nightmares).

It is a really distinctive act, because while Bruun personally identifies her Myrkur projects as black metal, there is a much more complex and nuanced sound being developed here. Her folk background feeds in heavily, and that tends to soften the harsher elements one would expect from a traditional black metal act and create something that feels a lot more mythological and unearthly. To a large degree the rage one would expect to hear in a metal album is absent. Instead it feels rather mournful and haunted. Long-term metal fans may struggle with Myrkur, because it often sits on the fringes of the genre. Anybody put off by the metal tag should probably give it a chance; it may pleasantly surprise you.

The seventh track, "Funeral", is the album's stand-out in my opinion. It's a heavy song, slow in pace and with a great distorted sound. Other key tracks include the opening title track "Mareridt" - an eerie prologue of deep bass rumbles and soprano wailing - and the fourth song "Crown" - a slow, contemporary sounding song that provides a solid contrast. At its best the album has a beautiful sense of atmosphere.

The remaining tracks vary, but are mostly very enjoyable. "Måneblôt" (track 2) presents a loud wall of noise, rich with thrashing guitars, before suddenly crashing down and getting replaced by acoustic folk music. It's a bit like the black metal version of folk group Clannad. That folk edge is even more pronounced in "De Tre Piker" and "Løven" (tracks 6 and 14, respectively).

It's not all great. "Kætteren" (track 10) sounds a bit too much like straight-up medieval music, and "Kvindelil" (track 13) is remarkably forgettable despite an attempt to give it a haunted, unworldly feel. Stuck back in the final third of the album is "Børnehjem" (track 11), a laughably bad combination of Gregorian chants and an awful child-like monologue; it's not simply the worst track on the album, it's a genuinely awful song.

Despite Bruun's claims, it is quite difficult to accept Mareridt as a heavy metal album, although there is a strong proto-metal influence and touches of black metal here and there. Instead it's very much its own thing - a sort of dark folk - and should really be celebrated as such. This is a wonderfully distinctive piece of work.