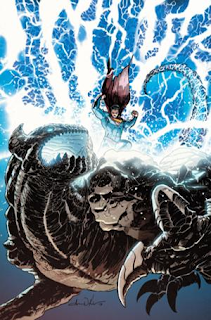 I have always maintained that Superman is the hardest superhero for whom to write. He is almost impossibly over-powered: he can fly, he's super-strong, he's near-invulnerable, he can fly in space without needing to breath, he has x-ray and heat vision, super-speed, icy breath and any number of other less famous powers that have been added over the past 75 years. What challenges a character like that? What poses a genuine threat?

The best writers know that the secret to Superman lies in the 'man' half and not the 'Super' half. He may be super-everything, but he's also honourable, credulous to a fault, saddled with a strict sense of morality and almost perversely naive. It's a personality that Christopher Reeve nailed back in the late 1970s when he played the character for Warner Bros. It's a personality that Zack Snyder and David Goyer seemed to completely miscomprehend when they wrote this year's troublesome Man of Steel movie. It is, however, one that Greg Pak has absolutely nailed in Action Comics.

This is a relief: Action Comics is DC's oldest title still in publication. This issue is the 936th since Superman made his debut in June 1938. If there's any title the company publishes that should be as good as it can possibly be, it's this one. The New 52 relaunch started promisingly with Grant Morrison at the helm, but rapidly declined into a confusing story of alternate dimensions and time travel. An abortive attempt to replace him with Andy Diggle ended before his first issue had even been published. In recent months the title has been acting as a sort of sideline to Scott Lobdell's Superman, with Lobdell writing both titles - that was actively wretched, and saw me drop the title completely until Pak came on board.

This issue is great, reuniting Superman with teenage sweetheart Lana Lang - who's something of a kickass professional in the New 52. There's a fight with a giant monster, another fight with a mysterious government assassin, and a final page hook that has me keen to find out what happens next. Aaron Kuder's artwork is distinctive and quite unusual given the usual over-muscled depictions of Superman we usually see. In short: this is exactly what I want from a Superman comic. This is why he's one of my favourite superheroes. (5/5)

Under the cut: reviews of Batwing, Daredevil: Dark Nights, Detective Comics, The Movement, Trillium, X-Men Legacy and Young Avengers. Also released this week was Stormwatch #26, but I've finally dropped this book - there's only so many months of Jim Starlin's godawful rubbish I can take before enough is enough.

While I've been fairly disparaging of Gray and Palmiotti's run on Batwing, this issue is actually a rather enjoyable one. It sees Luke Fox travelling to Italy on an undercover mission while teaming up with a member of the old Club of Heroes (an ancient Batman thing resurrected by Grant Morrison in his lead-up to Batman Incorporated). It's fast-paced, ties up some dangling plot arcs, and resolves neatly at the end. Is it a classic? Probably not. Is it worth US$2.99? Yeah, it probably is. (3/5)

Part #2 of "In the Name of the King" kicks off with Daredevil and Misty Knight on their way to Cuba to challenge a local gangster and rescue a crucial criminal witness. It's great stuff, with a particularly nasty villain, but it's an odd experience reading this book (by Jimmy Palmiotti) straight after reading Batwing (by Palmiotti and Justin Gray), since in both cases a superhero travels from the USA to another country to challenge a local gang lord. I'm not saying Palmiotti must have been running low on ideas this month, but they are bizarrely similar. (3/5)

A string of dead bodies are turning up around Gotham City, all showing signs of being eaten to death by bats. Could Kirk Langstrom, aka Manbat, be to blame? No, but he's definitely involved. John Layman follows up on his earlier Manbat storyline to give us a neat one-off story with which to finish off his excellent run on Detective Comics. It's good stuff, although I must admit I missed Jason Fabok on art - Aaron Lopresti does a reasonable job, but he's not quite up to the same level in my opinion. (4/5)

Another sensational and inventive issue for Lemiere's eight-part sci-fi miniseries. Like the first issue this one is split into two halves, in this case forcing you to read just the top half up to the end, then to flip the book 180 degrees and read the bottom half upside down. Things have gone deeply weird with this issue, but deeply weird in a wonderful way. This sort of inventive, curious science fiction should be wholeheartedly supported, and Lemiere's painterly, sketchy artwork is icing on the cake. (5/5)

We're well into the final lap for this excellent X-book, as a renewed and increasingly powerful David Haller challenges the evil Xavier doppelganger for psychic control of the human race. This is a distinctive issue, with a massive reliance on narration over action and dialogue, and superb artwork by Pham and Leisten. It actually reminded me a bit of Alan Moore's Promethea in the way it was written, drawn and structured. So a bit of an odd read, but one that really pushed home the epic nature of what Haller's attempting to defeat. (4/5)

This is the big climactic fight that pretty much wraps things up for this volume of Young Avengers. There's a two-part "after-party" in January, but in terms of the driving narrative this is it. It's a great issue, with wonderfully inventive use of the comic book structure that's been something of a hallmark for this series. In many respects it does feel like an extended epilogue to Gillen's Journey into Mystery, finally resolving old Loki versus young Loki and setting Thor's adoptive brother off towards his own comic book in 2014. I do hope there's another volume of this down the line, with Gillen and McKelvie focusing more on the other members of the team. There's too much potential here from them to ignore it. (5/5)

Winner of the Week: Trillium is a must-read, but I'm giving the award to Action Comics - it's great to have decent Superman back.
Loser of the Week: Well me, basically, since I accidentally bought The Movement #6 a second time instead of this week's The Movement #7. I'll try to get to it next week.
Posted by Grant at 9:35 AM