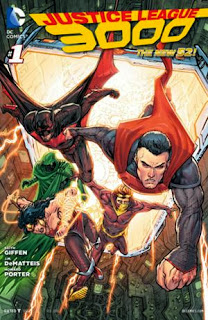 As the Big Two rationalise and relaunch their comic book lines (Animal Man and Batman: The Dark Knight just got the axe, plus Marvel are relaunching pretty much everything in January), brand is becoming increasingly important. Why should Marvel launch a new and original team book when they can just launch a new variation of Avengers? (For the record, in December Marvel are releasing Avengers, Avengers AI, Avengers Assemble, Marvel Universe Avengers Assemble, Mighty Avengers, Secret Avengers, Young Avengers and New Avengers. In January they add Avengers World.) Why should DC try to rework Legion of Super-Heroes when they can replace it with Justice League 3000?

Yep, this is the Justice League of the 31st century, replacing the Legion with five genetically replicated clones of Bruce Wayne, Clark Kent, Diana Prince, Hal Jordan and Barry Allen. Led by Teri and Terri, the "Wonder Twins", they're launched in a fight to save the galaxy from tyranny or somesuch.

This issue pretty much hinges on one clever concept, which is 'what would DC's greatest heroes be like if they didn't have the upbringings of their original versions?' Imagine a Superman who lacks the humility and humanity he learned via a childhood with the Kents. What is Batman like if he doesn't get motivated by the death of his parents? Think of a Wonder Woman who never lived among humans. It's a clever concept, but it's also a very stupid concept, because the answer to the question turns out to be 'well, DC, what you get is a comic book populated by complete assholes'. At one point the Flash asks "Am I the only one who thinks this is the stupidest idea ever?" No, Barry, no you are not.

This is early days, and certainly the book's saving grace is some stunning and quite different artwork by Howard Porter, but I'm not entirely certain this book is going to fly in the long-term. At a sensible US$2.99 per issue, however, I'm happy to wait for a few months to find out. (2/5)

Jim Gordon needs to change his prescription glasses, and possibly get his hearing checked, and while he's at it maybe book an appointment with his local therapist for symptoms of deep psychological denial. In this final issue of the "Batgirl Wanted" story arc, he stands less than a metre away from his own daughter, has a lengthy conversation with her, and doesn't appear to in any way recognise her because she's dressed up as Batgirl: that incredibly disguise where he can still see the bottom half of her face, her eyes and her hair. Plus, y'know, he can hear her voice. Worst detective of all time, or most inattentive father of all time? Either way, it's a pretty poor showing for ol' Jim, there. As for the bulk of the issue, it's actually rather by-the-numbers and disappointing - plus the final page return l of the character whose presumed death pushed the drama along for the past five issues kind of deflates the point of the whole exercise. (2/5)

The most outstanding thing about the current "Zero Year" arc is just how fresh it feels. How many times have we seen Batman's origins played out? Despite this, Snyder has come up with a completely fresh, exciting and clever take on Batman's first year under the hood. This issue delivers some great Bruce Wayne versus Jim Gordon backstory and conflict, all produced with the assistance of Capullo and Miki's brilliant artwork. (5/5)

Big changes coming through in this issue, including a final page moment that Bendis personally begged people not to spoil on the Internet - so I shall not. It's a brilliant issue, rich in menace and conflict, and flashing back to key moments in the last big Ultimate Universe crisis. Whatever Bendis has planned for Ultimate Spider-Man after this three-issue mini, I really hope it involves more of the same character development, heart and richness of emotion that he's made his trademark here. (5/5)

Here we jump into the second story arc of FBP it's becoming pretty clear that this is quite a different comic to what you'd normally get from DC Vertigo. There's a much stronger sense of the police procedural here, with a team of government investigators tracking and repairing damage to the time-space continuum. It's a comic that could just as easily be replicated as a television series if it wasn't for the more twisted and visually unusual fractures and fissures in physics that crop up from time to time. There's a very cheap first trade paperback due in January: I'd recommend any fan of science fiction and comic books give it a try, because at the moment FBP is just getting better and better. (4/5)

This issue plods along in a reasonable but unexceptional fashion, right up to the last three pages - then it all collapses into a case 'okaythatsallfolktheendbye'. This is the final issue of Katana, the little book that couldn't, and based on what I've just read they cancelled it pretty late in the day. This really is a case of a storyline stopping rather than ending, and after 10 months that's rather unsatisfactory. Plus if it takes four artists to produce 20 pages of artwork, you know things were rushed. (1/5)


Image Comics. Written by Chris Dingess. Art by Matthew Roberts and Own Gieni.

Lewis and Clark's expedition into unknown territory begins with an autopsy of a buffalo-based centaur and ends with zombies. In between is an excellent mixture of strong, dynamic storytelling (there's an absolutely stunning page depicting a character falling from a cliff to their death) and A-grade colourful artwork. I think Image may be onto a winner with this book: it's savage, inventive, beautifully illustrated and so far rather surprising. Great stuff. (5/5)

There's a popular form of comic strip in Italy known as 'fumetti', basically taking photographs instead of drawn artwork and telling a comic story like a sort of movie/comic book blend. It never really took off in English-speaking markets, although I certainly remember seeing it in the odd UK comic book or annual (Grange Hill springs to mind). John Byrne has brought this art form crashing into IDW with this all-new Star Trek adventure told entirely with digitally manipulated screen captures and photographs from actual 1960s episodes. Is it perfect? No. Does it feel like a lost episode of Star Trek? Absolutely. I'm not sure how much I'd enjoy seeing this done too often, but as a one-off novelty it is pretty awesome. (4/5)

After all of the non-stop excitement of the past few issues, Star Wars #12 is actually a pretty massive disappointment. Plot threads that needed to be resolved carefully are pretty much swept under the carpet. Characters are seemingly abandoned just when they might have become interesting, and the second six-issue arc doesn't so much climax and come to a screeching halt. We're left now with what sounds like an alarming cliche - Princess Leia marrying an alien prince so that the Rebel Alliance can hide out on his planet. On top of all of that the artwork feels odd and distorted this issue, as if there wasn't as much attention paid to it as in previous months. Worrying stuff. (2/5)

This book is such a refreshing antidote to Frank Miller's deeply unpleasant and inaccurate graphic novel 300. This is a representation of Sparta that's much closer to the historical reality, and it portrays a horrifying culture of warmongerers, slavery and inhumanity. Jordie Bellaire's artwork gives the book a very Vertigo-esque feel - indeed 10 years ago Vertigo is where I would expect to find this series. It's a great, dramatic and powerful read - and the fascinating interview with the book's historical advisor at the end is a valuable added extra. (4/5)

Power Girl's super-abilities continue to fail here in this issue, and she's forced to take the Huntress' lead in fighting crime. In recent months I've felt that this book has kind of lost its way, but this issue felt like things were getting back on track. There's also strong indications that it's going in interesting directions very soon, since Kara and Helena finally decide they need to get and meet their parallel universe relations - Batman and Superman - for the first time. Worlds' Finest hit its high point when it allowed Helena to interact with Damian Wayne. Hopefully the same sort of energy will be generated when she meets his father. (3/5)