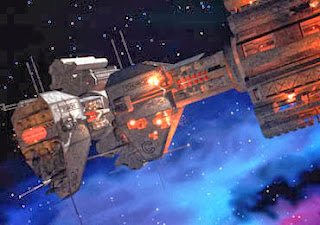 With a military coup d'etat against President Clark ending in failure, two surviving military resistance cruisers arrive at Babylon 5. With senators getting arrested back home, ISN News violently taken off the air and several offworld colonies declaring independence, Captain Sheridan takes matters into his own hands and announces Babylon 5's secession from the Earth Alliance.

Pretty much everything I liked about "Messages from Earth" and "Point of no Return" I continued to like about "Severed Dreams". The President's violent takeover of Earth's government is portrayed in an absolutely stunning manner. I was particularly impressed with the shutdown of ISN News; with the broadcaster featuring fairly prominently throughout the past two-and-a-half seasons it was quite disturbing to see it violently taken off the air by the President's soldiers.

The episode's climax is Babylon 5 at its most cinematic: Earth military forces at odds with one another, engaging in a large-scale firefight around the station. Teams of security personnel and Narn fighting Earthforce commandos in the cargo bays. Exploding spaceships, the apparent certainty of defeat, and then the last-minute salvation in the form of a Minbari battle fleet. This isn't just good Babylon 5, but television space opera at its absolute finest.

Such a beautiful episode title as well: very possibly my favourite in the entire series. Way back in the opening credits to Season 1 we heard Jeffrey Sinclair say that "the Babylon project was a dream given form". Now we just have severed dreams.

With the primary focus on the collapse of the Earth Alliance, it would be easy to overlook some of the episode's other major plot developments. The Shadows are revealed to have wormed their way into the League of Non-Aligned Worlds, forcing one planetary system against another in an attempt to bring about their collapse. Delenn shatters the Minbari Grey Council, with the religious and workers castes abandoning the warrior caste. This is massive, series-changing stuff. I'm quick to criticise Babylon 5 (and rightfully so) for its sometimes wooden acting and regularly risible dialogue and cartoon-level characterisation, but one thing the series does have going for it in spades is bravery. You can accuse Straczynski of a lot, but you could never accuse him of playing it safe when it comes to the narrative of his TV series. A lot of toys are getting broken here. A safety net is getting discarded.

I think my favourite moment in the episode - and it's a great, near-faultless episode - is the mini-arc for young Lieutenant Corwin. He was promoted back in "Exogenesis", and Sheridan had Ivanova try to subtly determine whether or not he was suitable for bringing into their Shadow-fighting, anti-Clark conspiracy. In "Severed Dreams" we get to see Corwin make that choice in the heat of the moment, and against Ivanova and Sheridan's previous estimation he turns out to be on their side after all. It's a beautiful, strong moment, and Joshua Cox plays it well.

So the midpoint of the series is resolved, and the second half of the five-year plan can begin. This episode gets a tick of approval, and how, bringing the Season 3 tally up to seven good episodes out of ten - or a neat 70%.
Posted by Grant at 10:06 AM