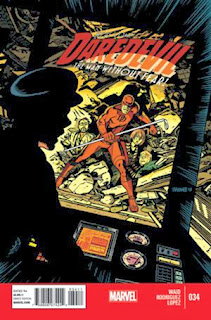 Daredevil #34 sees Matt Murdock reunite with his ex-girlfriend to save New York from the elusive Sons of the Serpent. The last two issues were a bit strange, with a segue to the southern USA and an encounter with a group of rogue monsters, but this issue snaps everything back into focus with the sort of faultless, immensely satisfying climax that you'd expect from Mark Waid. It has great, action-oriented artwork by Javier Rodriguez and more than one moment of perfect characterisation.

This volume of Daredevil has been one of the best things Marvel has published in years. It's got two issues to go, and this will leave it with a brilliant three-year arc that's hopefully going to be remembered as one of the character's all-time high water marks. It's genuinely been that good.

Sadly Daredevil relaunches early next year with a new issue #1 and a new- no, wait, actually the same creative team. Why relaunch it? This has been a consistently excellent seller for Marvel, with critical raves, and there is absolutely no reason to renumber the book than to sell a few extra copies of the first issue (which will, in all honesty, may as well be issue #35). While this issue is faultless, I am getting mightily bored of Marvel's constantly relaunches and renumberings. It gets even worse for a book like X-Men Legacy, which is getting relaunched and renumbered as well, only from issue #300 rather than #1. (5/5)
Marvel. Written by Mark Waid. Art by Javier Rodriguez.

I can't imagine I'm the only one who feels this book has lost its way. There was a strong drive behind the original X-Men's journey into the present, and it felt like it should have climax in the big "Battle of the Atom" crossover. Instead they're all still here, and it doesn't feel like there's any sort of direction for them any more. There's also no reason for them to have switched sides from Wolverine's team to Cyclops'. Here they're joined by X-23 on a raid against some anti-mutant zealots, and to be honest it's all rather dull. Note: the image depicted on the cover does not remotely happen inside the comic. (2/5)

Patrick Gleason and Mick Gray do great art on Batman and... Their stuff is stylish but never at the expense of readability. They've got a slick, cartoon-like aesthetic with stark, heavy inks that really suits Batman. This issue sees the Two-Face arc pick up a lot in terms of pace and tone, and builds to what looks to be a great climax. Alfred gets some great one-liners as well, which is always good to see: when written properly he's the DC Universe's wittiest character. (4/5)

The first thing that strikes me about Black Science (two issues in a row now) is Matteo Scalera's stunning artwork, which seems more like a French comic than an American one. The fact that they've managed to squeeze two issues out in the space of about four weeks is promising, and I'll be ecstatic if they can stick to that kind of schedule with this kind of quality. Remender writes a strong storyline to match, dumping the reader in-media-res and forcing them to catch up through a combination of good dialogue and well-paced flashback sequences. This is an outstanding comic. (5/5)

Brian Wood writes a great climax, closing with a high note on what has been this book's most enjoyable storyline so far. In many ways it has an easy job to be entertaining, because it's telling such an archetypal story. For all intents and purposes it's a western, with two old enemies - each armed and ready to shoot - stalk one another across the Scandinavian wilderness. Garry Brown's sparse, realistic artwork helps sell the book as well - it's one of those cases where the style of the art is perfectly suited to the style of the script. (5/5)

This is an issue of investigations, with at least three parties sneaking around into offices and hospital wards they probably shouldn't be in while they search for answers. The plot of this book has really been moving along in recent issues, which is making the month-long gap between hits all the more difficult to wait through. And of course it's all told with Mike Norton's exemplary artwork; he's an absolute ace at facial expressions, while keeping his artwork clean and short on non-essential detail. Top marks for Jenny Frisson's cover: this "Ophelia"-inspired number was one of my favourite comic book covers for the year. (4/5)

Saga is a cruel comic book. Writer Brian K. Vaughn apparently has no mercy, and his talent for creating likeable and distinctive characters is matched only by his talent for putting them in jeopardy, badly hurting them or even killing them off. All up it's such a stressful read some months. This issue sees three plot threads finally merge, and it's a fascinating yet bloody issue as a result. Fiona Staples continues to provide excellent art. There is so much imagination at work in her design of the various characters and locales. This is one of the best comics out there in 2013, and this specific issue is one of the best too. (5/5)

The second story arc comes to a genuinely thrilling climax as the massed and enslaved Mon Calamari and Quarren rise up against their Sith captors. It's the kind of climax that the main Star Wars title completely failed to deliver last week. The only thing that felt like a drawback was Brian Thies' slightly retro artwork. I don't want to make you think it's bad - it's clearly very good - but I do wonder if it's the best fit for a Star Wars title. (4/5)

I'm finding there's a problem with Thor: God of Thunder. Its first storyline, the epic "Godkiller" arc, was so ambitious and so brilliantly executed that now that the follow-up isn't as astoundingly good I'm finding myself excessively disappointed. This isn't a bad comic by any stretch, but it has definitely gone from outstanding to merely adequate. I think one of the big problems is that it's given the readers a lot of new characters all at once, and then expected us to care about what happens to them when in truth we hardly know them. Another problem is Ron Garney's art: he's a fine artist on the right book, but doesn't match the godly tone of Aaron's writing half as well as Esad Ribic did. (2/5)

I absolutely smitten with this book, and I strongly suspect that a lot of people reading this blog will become smitten with it as well. It's a dark, funny, clever and charming fantasy story with a strong female protagonist and wonderfully illustrated. In this issue Rascal continues her flight from the city watch and the nightmarish Umbral with the assistance of an old homeless man - who may be crazy and may be a powerful wizard. This book deserves to be a massive, massive hit. If you like clever fantasy comics, you should be reading it already. (5/5)

It's funny - only weeks ago I was introduced to the most vile form of torture ever performed in human history, and here we are with the First Born being tortured in exactly that manner. Given this isn't a mature readers title, the details of the torture are kept slightly vague, but if you know what it is that's being done it's absolutely revolting. Meanwhile Wonder Woman and the gang are off to Chernobyl to rescue Milan from Cassandra. It's an entertaining instalment, but I have to admit (and not for the first time) that this story arc, now 26 issues long and counting, is beginning to wear a bit thin. I'd like to see Diana tackle at least one thing that doesn't involve Zeus babies. (3/5)

This is the first half of a two-part epilogue to Young Avengers. I have to admit, I'm rather surprised that what I figured was a full-blown monthly superhero comic has actually turned out to be a deliberately limited series with beginning, middle and end. This issue - and, I assume, the next - is a series of character vignettes to resolve the character dynamics and story arcs and basically put all of the toys back into the box for the next creative team. It's good, enjoyable stuff, but I do feel that we missed out on something brilliant with this book. It started so strong, and has just sort of slid to its conclusion. (4/5)

Winner of the Week: Daredevil if you like superheroes, Umbral if you don't.
Loser of the Week: All-New X-Men. If this was a school it would be going home with a "must try harder" report card.
Posted by Grant at 2:53 PM