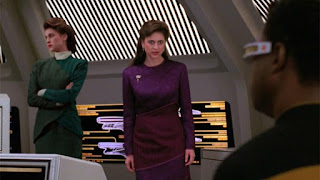 La Forge (LeVar Burton) gets the chance to meet the real Dr Leah Brahms (Susan Gibney), the Starfleet engineer who formed the basis for his holodeck fantasy a year earlier. Sadly for La Forge, the real Dr Brahms is not what he expected. Meanwhile the Enterprise has an encounter with a previously-undiscovered space-faring organism, and winds up nursing its infant.

Okay so the title has a double meaning, since it refers both to engineers considered the Galaxy-class starship engines as their 'baby' as well as to the actual alien infant that latches itself to the Enterprise's hull in order to feed on the ship's energy reserves. Let's quickly cover that alien subplot first, since the rest of this review is going to involve a lot of loud ranting about runaway misogyny. It's actually quite a neat little plot. The Enterprise gets a little too close to a pregnant sort of space whale, so it attacks the ship. In the process of defending themselves, the Enterprise crew accidentally kill the creature. When they discover it was pregnant, they try to free the infant and escort it to a food source.

The look on Picard's (Patrick Stewart) face when the Enterprise accidentally kills the creature is great. He's genuinely remorseful, and that strong regret drives his actions for the rest of the episode. The baby alien may immediately latch onto the Enterprise and begin suckling on its power, but Picard won't countenance harming it until he can get it to a place with food and safety. It's all rather sweet, with a few nice moments of humour and a great scene involving Dr Crusher using the ship's phaser array to perform a deep-space Caesarian section.

While all of this is going on, Geordi La Forge is doing his best to woo the girl of his dreams: the eminent starship engineer Dr Leah Brahms. Back in Season 3's "Booby Trap" Geordi used a holographic recreation of Brahms to help him find a solution to a ship-endangering problem. While doing it, he had the Enterprise computer calculate an estimated personality for Brahms, and he wound up sharing a weirdly masturbatory romance with her simulation. I reviewed that episode a year ago, but just to give you a sense I called it "a profoundly misguided act of character sabotage, since it takes a character who was previously fairly noble and turns him into a creepy kind of stalker." This episode, in theory, should be Geordi's come-uppance. If only.

From the get-go Geordi is sleazy and creepy, and bizarrely unprofessional. He tries to flirt, he invites her out for dinner, he uses his extensive research of her holodeck simulation to know what food she likes. When she politely rebuffs his overtures he gets surly and resentful. There's an early scene where Geordi boasts of how great it's going to be when Brahms arrives, and Guinan (Whoopi Goldberg) is fabulously disapproving while simply nodding and listening. She knows what a revolting pit he's dug for himself, but she also knows he's adult and dig his own way out if he wants to. It's one of the reasons I like the character of Guinan so much: Goldberg holds back a lot and keeps her polite, supportive, but distant.

Inevitably Brahms finds herself in Geordi's holodeck simulation, and is rightfully disgusted. Geordi arrives 30 seconds too late, and she berates him for the shocking and deplorable violation of her privacy and person that he's undertaken. Gibney plays the scene really well, because it should be an awful thing to watch. It's like a celebrity meeting someone who masturbates to hacked photographs of them naked - only more so, since it's an interactive holographic replica that could in theory do anything the user demanded of it.

This is, of course, the chance for Geordi to see the horrifying error of his ways, apologise profusely, and slink back to engineering in the hope he might still have a job by the end of the day. Instead the script (by Maurice Hurley) has him shout accusations back at Brahms, claiming it's really all her fault because she's been so cold and unwelcoming towards him since she arrived on the ship. The episode ends with Brahms profusely apologising to Geordi over a drink in Ten Forward about how rude she had been to him, and how funny it really is that he had a holographic sex puppet of her stored on the ship's computer. It's difficult to imagine a more contrary or wrong-headed treatment of the material, not just refusing to treat Geordi's actions seriously but to actively side with him. Star Trek: The Next Generation is often quite entertaining, and occasionally it's pretty bad. It's very rarely actively repellent to watch. In this case it's engaging in active misogyny, excusing appalling male behaviour by claiming women are frigid shrews.

The problem with continuing television drama is that things that happen in one episode do have an effect on others. We get to see Geordi continue as chief engineer through another three seasons and four feature films after this, but he'll always be an unrepentant and sleazy sex pest who deserved to be fired and dishonourably discharged from Starfleet. To rub salt in the wound, the series finale "All Good Things" - which features several scenes set years into the future - implies he and Brahms wind up marrying one another. Their answer at dinner parties to "So how did you two meet?" must be a ball-tearer.

16 episodes into Season 4, and 11 episodes have been good. This was absolutely and categorically not one of them. The quality ratio drops to 69 per cent.
Posted by Grant at 7:48 AM