Star Trek: The Next Generation: "Devil's Due" 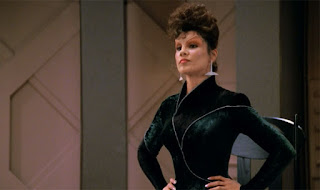 It's 4 February 1991, and time for more Star Trek: The Next Generation.

The Enterprise rushes to the aid of a Federation science station on Ventax II. The planet's local population are running rampant with mass hysteria, believing the world is about to come to an end with the return of the evil goddess Ardra. Captain Picard (Patrick Stewart) arrives to calm matters, only to discover that Ardra (Marta Dubois) has actually arrived.

Until now Season 4 has been an excellent year for Star Trek: The Next Generation, with several great episodes under its belt. Even the poor episodes have felt like partial failures rather than out-and-out disasters. That's sadly not the case with "Devil's Due", an incredibly weak and poorly conceived episode that feels about 25 years out of date and is an absolute chore to watch.

It turns out there's a reason for the episode feeling so outdated. The original premise was developed in the late 1970s for Paramount's proposed Star Trek: Phase II television series. It was revived during the writers strike that affected production on Season 2 of The Next Generation, in much the same manner as "The Child". While "The Child" made it into production during that season, it took another two years for "Devil's Due" to reach a satisfactory shape. Well, satisfactory for the production team, not I suspect satisfactory for those of us forced to watch.

The episode's biggest problem is that it thinks it's a comedy - a con artist using parlour tricks and some high technology to masquerade as a god - but pretty much every joke falls flat on its face. Marta Dubois piles on the camp as Ardra, but it all makes her feel very much like a second-rate Q replacement. That's made even more obvious when comparisons to Q are made in the dialogue. Even Patrick Stewart struggles to make anything out of the material - his courtroom summation at the episode's climax is rather painful to watch.

The other major problem is simply that of tone. The original script wasn't written for The Next Generation and it shows. Were it James Kirk facing up against the devil, and Spock acting as a neutral arbiter, it might just have been watchable - but it still wouldn't have been very good.