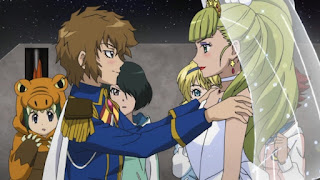 Last episode ended with yacht club president Lynn being confronted over secret calls she was making to someone off the Bentenmaru, and Lynn in turn offering Marika a job: kidnapping former club president Jenny Dolittle. This episode reveals who's paying for Jenny's kidnapping - Jenny herself, in the attempt to escape an unwanted marriage.

Oh Bodacious Space Pirates - I knew you weren't going to make one of your characters evil. The show is simply too light and fluffy, too amiable, for that sort of plot twist. Instead it goes for another one: it's not simply that Jenny's marriage will annul her ability to inherit her family's company, she actually in love with someone else - her replacement club president Lynn. That's not a plot development that I had anticipated, and I applaud the series' creators for undertaking such a twist without any sleaziness or fan service.

As far as anime series go, Bodacious Space Pirates has never really constructed itself for a male gaze - at least, not in a highly sexualised fashion - and that restraint continues here in admirable fashion. Lynn and Jenny are simply presented as being in love. Beyond that it's nobody else's business.

If there's a major criticism to be made, it's that once again not enough appears to happen. The Bentenmaru gets contracted to undertake Jenny's kidnapping but as soon as that's agreed Jenny has rescued herself, turning up and simply needing rescuing from her own shuttle. By the time a space battle kicks off - Jenny's corrupt uncle desperately wanting her back for her wedding - the episode's over. I would be less frustrated if the episode was spending its time developing and enriching characters, or fleshing out a fascinating back story and universe, but to be honest I could actually tell you what it spent its time doing. It just seemed to take a long while to do very, very little.

That's why, despite a great plot development, I really couldn't get behind this episode. It simply felt dull, and threw away nearly every chance it had to be a little more fast-paced and interesting. The characters and the design work are both appealing, but they're servicing such a drawn-out story. There's material in this series for 13 episodes, but it's been stretched out to 26, and sometimes that really does make it a little too drawn-out and boring to watch. 17 episodes in, and 12 have been good. The quality ratio drops to 71 per cent.
Posted by Grant at 7:45 AM