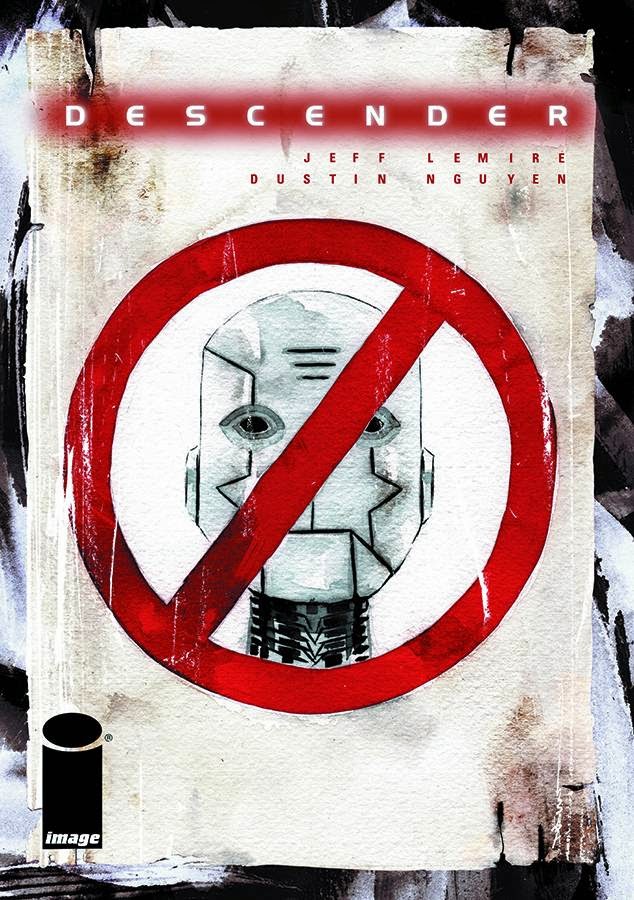 I was intrigued by the first issue of Jeff Lemire and Dustin Nguyen's Descender, but I am genuinely impressed with the second. This series is set a decade after a galaxy-wide cataclysm brought one interstellar civilization to its knees. Robots are hunted down and destroyed, and a robot designed to look and act like a ten year-old boy has just mysteriously re-activated on a long-dead mining colony.

This issue cleverly jumps back and forth on a page-by-page basis. On one page we can see the boy robot Tim-21 run for his life from a gang of salvagers who have arrived on the colony to destroy him and sell his CPU. On the next page we flash back to see Tim's creation, arrival on the mining colony and growing bond with the family he has been assigned to support. It's a great mixture, because it delivers an exciting action scene and fills out some much-needed back story on the book's lead character.

If you read the first issue and were on the fence, I'd strongly recommend reading this issue and seeing if it impresses you more. It certainly impressed me: strong writing, excellent artwork and a clever narrative structure made this issue an absolute pleasure to read. (5/5)

Under the cut: reviews of Imperium, Kaijumax, Rai, The Surface and Wasteland.

A super-powered psychic has declared an all-new nation, and is defending it against Earth's opposing military. This issue follows an agent code-named Gravedog, who has just betrayed his own team to join this new nation. It's all very readable, rather clever stuff. There are a lot of ideas flying around this comic, and even with one issue it's easy to pick out a favourite character: the robot Mech Major who has blossomed into an advanced intelligence and insists on being referred to as Sunlight on Snow. Doug Braithwaite's artwork is crisp and attractive, and in the very best style of American comic books. (4/5)

Kaijumax tells the story of where all the giant monsters go once they've been defeated. Electrogar is a gargantuan sort of insectoid creature who has been captured and sent to Kaijumax, with his children left somewhere in the outside world. Can he escape to rescue them? Will he survive life in prison? It's all a rather brilliant and deliberately silly riff on the prison movie, as viewed through the lens of the giant monster movie, so if you've ever wanted to see a giant lizard threaten to shiv a monster ape-whale, this is almost certainly the comic book for you. (4/5)

In a future Japan, Rai leads a united rebellion against the all-powerful "Father" that rules the country. It's a little disorientating coming into a serialised comic during a climactic chapter, but it's testament to Matt Kindt's skills as a writer that it's so easy to follow. I had the same experience reading the last issue of X-O Manowar; this kind of broad accessibility appears to be a hallmark of Valiant's work. There is an odd technique used here of narrating the events in the past tense. I found it reduced the tension slightly, making it about something that had already occurred, rather than something that was unfolding as I read it.  Clayton Crain illustrates the proceedings with a very French-style kind of artwork that definitely matches the story Kindt is writing. All up it's a highly entertaining slice of science fiction action. (3/5)

Anyone hoping for a more coherent reading experience with The Surface's second part are going to walk away disappointed. Personally, I'm completely fine with it. This dense, highly surreal book wears its influences on its sleeve, whether it be Grant Morrison, Philip K. Dick or Paul Verhoeven. I suspect for many readers this sort of weirdness for weird's sake is going to be a big turn-off. I've always enjoyed it to an extent. There's a sort of Aeon Flux vibe running through this piece, and I've found it's best enjoyed if you just let Kot's story sort of wash over you. (3/5)

Johnston and Mitten's epic 60-issue post-apocalyptic story finally comes to a close with this special epilogue, telling what happens in the tale for the next 100 years. It's the perfect kind of ending: beautifully written, oddly mournful, and absolutely epic in the telling. Now obviously it's rather ridiculous to recommend a book on its 60th and final issue, but I strongly recommend that you track down this series in trade paperback, from the beginning, and experience the entire story for yourself. Antony Johnston is one of the best comic writers out there between this, Umbral and his exceptional SF series The Fuse. Trust me: you won't regret it. (5/5)
Posted by Grant at 2:06 PM