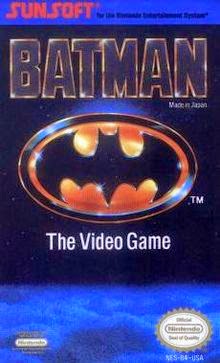 In 1989 Batman was everywhere. The release of Tim Burton's live-action feature film knocked the English-speaking world into a Bat-themed frenzy, and for a while there you had no means of escape from that black and gold Bat symbol. It was plastered over t-shirts, posters, record stores, it was on the television, in the cinemas. Everywhere. In every direction you'd look, including in videogame stores.

There were two Batman videogames produced in 1989. The first was simply title Batman, and was developed by Ocean Software for the PC, the Amiga, the Commodore 64, the Atari ST and a bunch of other personal computer formats. The second was Batman: The Video Game, produced by Sunsoft and released for videogame consoles - including the NES. It's this second game that was by far the better of the two.

The game doesn't really follow the plot of the film. In fact it plays out in a separate enough manner that a suspicious person would guess that Sunsoft was already developing a Batman-based videogame when news of the movie went around. It's clearly been visually designed to reference the film, but its story suggests a different starting point. (This isn't unusual: in 2003 Bethesda's Pirates of the Caribbean was an unrelated pirate game re-skinned to vaguely resemble the Disney movie.)

Batman: The Video Game is a platformer, and that's a genre of game I'll be talking a lot about in future posts. The NES was pretty much the king of the platforming genre, since it was a style of game that the console seemed technically tailored to produce and its breakout game - Super Mario Bros - had such an extraordinary influence. Batman is one of the better platformers to feature on the console: challenging without being too hard, interesting to look at and with enough variations in gameplay to hold the player's attention. There were Batman games before and after this one, but it's arguable there wasn't a better one until the Arkham trilogy on the Xbox 360 and PlayStation 3.
Posted by Grant at 9:41 PM