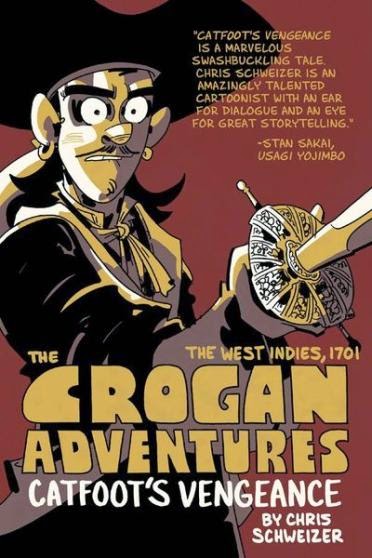 For some years now Chris Schweizer has been writing and illustrating a series of excellent graphic novels, all based around the historical ancestors of schoolboy Eric Crogan. With the series moving from black and white to colour, some of the older volumes are getting re-released by Oni Press in new full colour editions. This week sees the release of the first book Crogan's Vengeance, now retitled The Crogan Chronicles: Catfoot's Vengeance to bring it in line with the series as a whole.

After a brief present-day prologue, the action of this graphic novel shifts to the West Indies in the year AD 1701, where sailor Catfoot Crogan suffers a series of misadventures that lead him into a life of piracy - and a fight to the death with the traitorous pirate mate D'Or.

This is a 200-page all-ages story of piracy in the West Indies. It's backed by some solid historical research and beautifully paced. I found in an immensely enjoyable and breezy read; the sort of graphic novel where you're reading quite fast and non-stop to get to the end.

It's also wonderfully illustrated in a nice cartoony style. There isn't a lot of detail to the artwork, but it serves its story impeccably. Panel layout is refreshingly clear and uncomplicated, with key moments of drama given suitably large frames to make their impact. The colouring on this volume is excellent, particularly when you remember that the pen and ink artwork was originally composed for a black and white book. There's a level of restraint to the colours - only a few each page - that really makes a striking impression.

Catfoot Crogan is an immensely appealing character, and while I'm aware that the format of this series requires the use of different protagonists in different historical periods, I'd be very happy to see a few more adventures featuring Catfoot. There really aren't enough pirate comics getting produced: it's a wonderful setting with a whole range of archetypes ripe for playing with and transforming.

It's taken me far too long to sample the Crogan books, and now that I've read one I'm desperate to go and read more. That's surely as high praise as a book can get. This is brilliant stuff: thrilling, intriguing and wonderfully sweet.

The Crogan Chronicles: Catfoot's Vengeance is available from Oni Press.
Posted by Grant at 7:31 AM