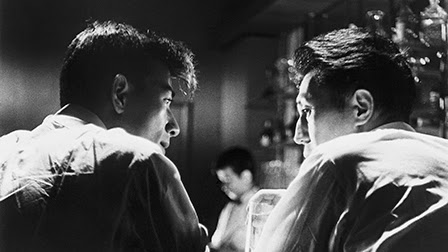 Masaki Kobayashi is best known as the director of Kwaidan, a widely acclaimed and award-winning Japanese horror film. Before directing that iconic production, however, Kobayashi directed a wide variety of different films - many of which were uncharacteristically provocative for the period in which he was making them. His films addressing Japan's war experience in particular caused significant controversy.

I Will Buy You, released in 1956, is not a war film. Instead Kobayashi turns his attention to one of the biggest post-war phenomenons in Japan: baseball. This pastime was imported as part of the American occupation, and became an unparalleled success.

Kishimoto (Keiji Sada) is a talent scout for the Toho Flowers, a major league baseball team. He is desperate to sign up college player Kurita (Minoru Ooki), but to do so means outsmarting a range of rival scouts, as well as getting past Kurita's girlfriend Fueko (Keiko Kishi) and his avaricious manager Kyuki (Yunosuke Ito) - who has latched onto the young sportsman like a parasite and is exploiting each talent scout for his own financial gain.

What is interesting about I Will Buy You is that, for a baseball film, it contains hardly any baseball. Instead it focuses entirely on the behind-the-scenes machinations. Baseball had become a big business by the mid-1950s, with millions of yen being thrown around signing up new players. Kobayashi takes a highly cynical view of the kind of behaviour this generated, and the film soon becomes a spiralling series of offers, counter-offers, acts of corporate sabotages, expensive gifts, bribes and even outright lies.

Keiji Sada gives a strong central performance as Kishimoto. On the one hand he's a principled and thoughtful young man, and genuinely wants to do right by everyone with whom he deals. At the same time the cut-throat business in which he's in simply doesn't allow him to act in a way that will always salve his conscience. Sada balances the two sides of his character well: he comes across as a properly fleshed-out human being throughout the film.

Equally fascinating is Yunosuke Ito as Kyuki, the independent operator who found Kurita and first alerted the nation's various talent scouts to his existence. He's a mercenary, manipulate character, in so many respects utterly unlikeable. Despite these traits, Ito plays the role in such a way that we genuinely feel sorry for him. He is suffering from a chronic illness that's only getting more severe, and it's the downfall of his character that when choosing between health and money he goes for the money every time.

Japan's pro-baseball industry is not reflected well in this film. Kobayashi is at pains to point out to the audience that what seems like an entertaining sport on the surface is a genuinely nasty business underneath. In many respects it's surprising that this film was made so early, in 1956. While its black and white photography and fairly static camera work gives it away in visual terms, the story it is telling still has enormous relevance today.

I Will Buy You is available in a digitally remastered version as part of Criterion's DVD box set Masaki Kobayashi Against the System. The set provides an excellent range of his pre-Kwaidan, highly politicised films, and are a valuable addition to Criterion's growing range of such sets (via their Eclipse label).
Posted by Grant at 8:30 AM