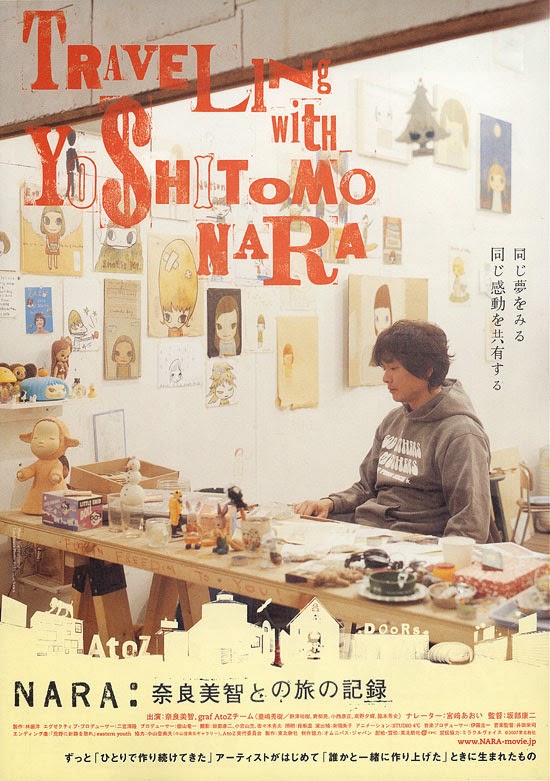 I am fascinated by documentaries about artists. It doesn't really matter what medium in which the artist works. It could be an author, a director, a panter or a sculptor - even a puppeteer. There is something I find very interesting about seeing how different artists work. I like seeing them create, and then talking about how they create.

Traveling with Yoshitomo Nara is a 2007 feature documentary that tracks the titular artist's development of a massive new exhibition in his home town of Hirosaki. While work proceeds on an entire village of hand-crafted houses, each populated by Nara's massive popular paintings of cynical, wide-eyed children, we follow him from country to country making public appearances, meeting his fans and exhibiting smaller works across Asia. The documentary is directed by Koji Sakabe, a noted director of television documentaries in Japan.

This sort of documentary rises and falls based on the appeal of its subject matter, and it's here that the film has really lucked out. Yoshitomo Nara is an amiable, humorous and seemingly very relaxed artist. The "A to Z" exhibition that the film tracks (Sakabe followed Nara around with a camera for 420 days) marks Nara's first collaborative work, and so much of the film focuses on his conversations with support staff and artists from the creative ensemble Graf.

The film also takes time to actually showcase Nara's artwork. I had a passing familiarity with his work before I watched the documentary, but its regular montages of his art successfully demonstrate just how much depth and variety there is within what initially seems like a very limited stylistic repertoire. There is a sense of play and humour about his paintings and sculptures, and it's telling that so many of the fans we see during this documentary are children. One particularly striking sequence, found early in the film, sees Nara meet his Korean fan club in Seoul. There's a group of extremely excited young women who ask him during a question-and-answer session if he's married, or if he has a girlfriend. The only person who seems to be there for the art is a seven year-old girl, and the encounter he has with her - and the subsequent letter he receives from the girl's mother - is extraordinarily touching.

The documentary forms part of a series of films on Japanese pop artists commissioned by the American anime distributor Viz Pictures. Based on the quality demonstrated here, I'm rather keen to check the others out as well.
Posted by Grant at 9:19 AM