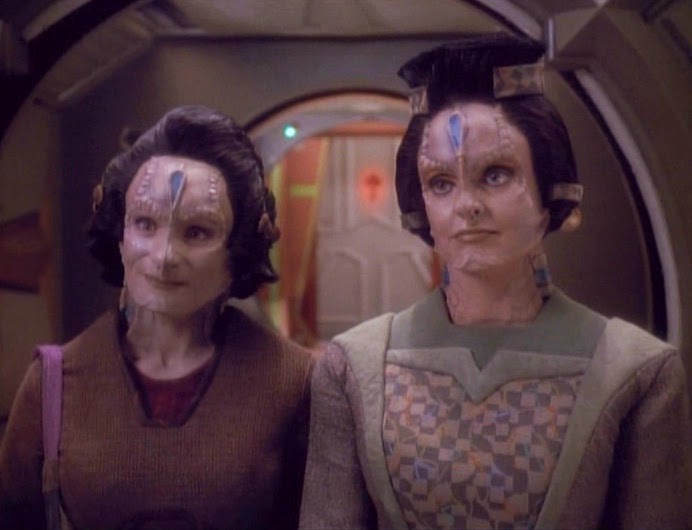 With a peace treaty finally signed between Bajor and Cardassia, the two planets unite on their first joint scientific mission: establishing a permanent communications link through the Bajoran wormhole. When a Bajoran cleric arrives on the station warning of a 3,000 year old prophecy and demanding that the experiment be called off, Commander Sisko (Avery Brooks) is forced to take a stand on his position as the Emissary: is he a religious figure or a Starfleet officer?

You know that phrase "a curate's egg"? It refers to something that's overall pretty bad, but which contains some good things. That's pretty much "Destiny" in a nutshell - or an eggshell, I suppose. Overall it's that dreary old story about an ancient prophecy coming true, and how everything the characters do to avoid the prophecy just help to make it come to fruition. It lacks drama as well, because we know going in that the prophecy being touted - three Cardassian scientists will destroy the wormhole - can't possibly come true without destroying one of the key premises of the series. So rather than get emotionally engaged by the story, you just sort of sit there drumming your fingers until the characters realise they misinterpreted the prophecy.

Where the episode excels is in its treatment of Commander Sisko. The pilot episode established him, very unwillingly, as the Emissary of the Prophets. As far as Sisko is concerned, he's a Starfleet officer who stumbled upon a wormhole and met some very strange aliens inside. To the Bajoran people he's a religious icon who was prophesised to bring them all one step closer to their gods.

Imagine the weight of that. Imagine having a healthy respect for the religious beliefs of other cultures, but then discovering one of those cultures believes that you - an atheist - is their equivalent of Moses. How would you cope with that? What would you say to those people? All things considered it's a marvel Sisko didn't pack his bags and run a mile.

The series has touched on Sisko's position with the Bajoran religious hierarchy a few times so far, mainly in political terms, but here the series dives headlong into his religious position instead. He's the subject of numerous prophecies, and as he reads through some of them he can't deny a lot of them have come true. He ends this episode in a very different place to where he started: not necessarily believing in his status as Emissary, but certainly a lot more interested in what it means. The episode also adds a new wrinkle to his relationship with Major Kira (Nana Visitor), since she makes it very clear here that she firmly believes him to be the icon her religious claims him to be.

Deep Space Nine's handling of cultural difference and religious faith is unparalleled in the Star Trek franchise and, to be honest, in SF television in general. Most science fiction dramas treat religion as either the electrified third rail or with a sometimes shocking disdain. The only series I can think of that actually give the idea of alien religion any kind of respect are Babylon 5, Alien Nation and Deep Space Nine, and I think far and away DS9 does the best job.

This episode also features a rather sweet subplot involving Chief O'Brien (Colm Meaney) getting uncomfortably close to Gilora (Tracy Scoggins), one of the Cardassian scientists. There's a comical misunderstanding - he's standoffish and rude, and she misinterprets this as a sexual overture - that could be tedious in the extreme, but both Meaney and Scoggins play it marvellously. It has an extra resonance for O'Brien I think, since he was established as a quite damaged veteran of the Cardassian War back in The Next Generation. He instinctively doesn't like the Cardassians, and encounters like this push against his preconceptions. This is where Deep Space Nine excels: it does the social allegories that all Star Trek productions did, but it allows its characters to be fallible at the same time.

It's surprising just how much entertainment value this episode squeezes out of such an old and tedious premise. It just goes to show you that with the right script and cast you can make the most stereotypical ideas fresh and enjoyable again. 12 good episodes out of 15 gives Season 3 a quality ratio of 80 per cent.
Posted by Grant at 11:51 AM