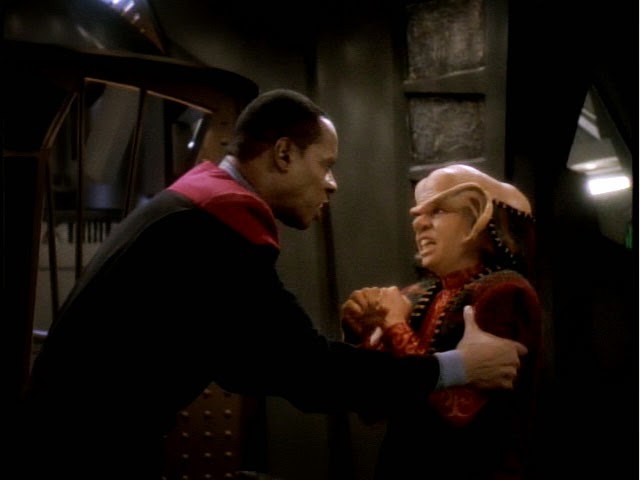 While returning in a Runabout from a Bajoran colony, Odo (Rene Auberjonois) and Kira (Nana Visitor) detect a Maquis attack. They pursue the Maquis ship down to an isolated moon, but lose the enemy pilot in a vast cave system. The two are separated, and when they are reunited it is because Kira's foot has become encased in a rapidly crowing crystalline structure. With the caves growing unstable, Odo races to free her before he is forced to abandon her to die.

"Heart of Stone" is an episode that, like "Life Support" before it, I remember really hating on its original broadcast, and, like "Life Support", I'm now finding my opinion has entirely reversed. This is not the most perfect episode of Deep Space Nine, but its good elements by far outweigh the bad. Overall I was rather impressed. As long as you can overlook the appallingly cheap props and CGI used to create the crystal structure that's trapping Kira, there's much here to recommend.

Trapping Odo and Kira together means giving them time to actually talk to one another and open up about a few things. At first it's simply re-affirming the close friendship that has developed between the two. By its climax it's Odo finally admitting that he is in love with Kira. She appears to reciprocate, but of course by the episode's end it is revealed that it wasn't Kira at all, but rather the leader of the Founders (Salome Jens) performing a ruse to discover why Odo is so attached to the humanoids with whom he lives. This storyline is well placed in terms of the Dominion story arc - it's been a few too many episodes since anything developed on that front, and it's good to see it raised again in such an unexpected fashion. On the other hand, until the ruse is revealed it does feel mightily awkward. Kira's boyfriend only died one episode ago, so seeing her apparently profess her undying love for Odo jars quite badly. It would have helped to hold this episode back for three or four weeks to let the episode feel more natural before the twist reveals all.

It's a great bit of character development for Odo, redefining the way he interacts with Kira and solidifying his fairly tense relationship with his own people. He looks pretty damned certain when he threatens to kill the Founder, despite her protestations that 'no changeling has ever harmed another'. That line will come back to haunt the series in a big way by season's end. This episode also finally reveals the origin of Odo's name, which is a beautifully told story. Rene Auberjonois does great work with it.

While the main plot is entertaining, albeit with some dreadful production values, it's the subplot that engaged me more. Nog (Aron Eisenberg) has reached the Ferengi 'age of attainment', and must select an apprenticeship. He chooses to enrol in Starfleet Academy, something that requires a letter of support from an incredulous Commander Sisko. It's a deftly played series of scenes that start off with typically humorous jabs at Ferengi mercantile culture (Nog attempts to bribe Sisko, as per tradition) and ends as serious drama. Nog sees how poorly his father Rom is treated, can see an identical future for himself, and wants out of the Ferengi merchant culture altogether. It's a huge step forward for the character, and makes him much more interesting going forward. The scene in which Sisko angrily confronts Nog to get him to drop his incessant attempts to join Starfleet is the best work Aron Eisenberg has ever done. It's intelligent, heartfelt stuff.

I found a great quote by Robert Hewitt Wolfe, one of the writers of Deep Space Nine and co-writer of this very episode. He said: 'It just struck me one day that out of Wesley, Jake and Nog, the one who will really become Starfleet and stand on a bridge to say "engage" twenty years from now would be Nog.' It's one of those startling character developments where it begins sounding ridiculous and then suddenly makes the perfect kind of sense.

Another good episode brings the Season 3 tally up to 11 good ones out of a total of 14, and a quality ratio of 79 per cent. Based on those numbers, it would seem that Deep Space Nine just gets better and better.
Posted by Grant at 7:11 PM