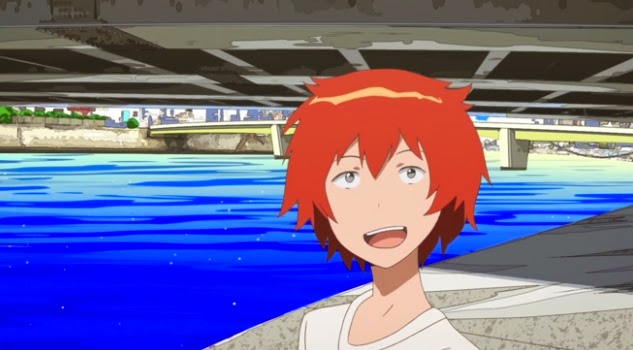 After the sudden alien-centric climax to episode 6, Tsuritama appears to jump straight back down to Earth in episode 7. Yuki finally spends his earnings on his own fishing rod and tackle, and starts working on catching sea bass from the shore. Natsuke's birthday is fast approaching, with his sister Sakura making her own special preparations. Haru gives up fishing entirely, declaring it dangerous, and takes up soccer and a ball-and-cup instead.

It all seems as if we're back to where we started with this amiable but relatively slow-moving comedy anime. The last episode promised so much with its sudden revelation of triangular alien entities above the ocean off Japan. This episode picks up with Yuki learning to fish for sea bass and Natsuke brooding over his impending unwanted birthday celebrations. It's only Haru who seems to keep any sort of momentum going at all, refusing to go back out to sea and taking up new hobbies to accentuate his point.


I'm growing to rather adore Haru. He started off gratingly irritating with a high-pitched voice and tediously weird personal habits. Now I'm finding him rather likeable, and occasionally adorable. His purple eyes are a nice touch: distinctively unearthly but subtle enough to not draw too much attention. The voice is still a bit much, but I live with it.

There's more serious drama going on with Natsuke and his family. His father doesn't expect him to take over the family shop, but never spoke to him about it. His sister's made him a bracelet for his birthday, but his feud with his father denies her the chance to present it to him. When she becomes upset his immediate reaction is to shout at her and slap her in the face. I'm not quite sure what the intention was in these scenes, but the effect has been to make Natsuke a much less likeable character at the episode's end than he was at its beginning.

The episode ends on a deeply weird and ominous note, tying into the strange alien phenomena of the previous week. It's all a bit too little and a bit too late, however: the episode's done its damage and set things back considerably on the characterisation front. I'm still engaged by the series, but this certainly was not one of its best episodes. We're seven episodes in and five have been good: that's a quality ratio of 71%.
Posted by Grant at 9:22 PM