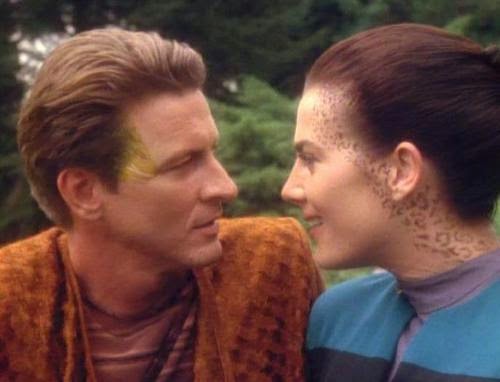 On the station, Quark tries to get a holographic picture of Major Kira so that he can include her in one of his clients' masturbatory holosuite fantasies. Meanwhile the Defiant is patrolling a star system where a planet suddenly materialises out of nowhere. The planet, named Meridian, only shifts into our dimension once every 60 years. When Lieutenant Dax falls in love with one of its residents, she has to make a choice whether to stay on Meridian with him or return to her friends on Deep Space Nine.

So basically this is Brigadoon in space. And it's awful. No, more than that. It's irredeemable, eye-gougingly, please-God-please-make-it-stop, ruinous, appalling shit; television so inexplicably incompetent and embarrassing to watch that if there was any justice in the world its writers and producers would be sent to their offices to tighten up their resumes. Even when the episode drags itself away from the tripe that is Jadzia Dax's Brigadoon fanfic booty call, it's just to return to a comedy bit about Quark trying to invade Kira's privacy and co-opt her image for a sex simulation. This is the worst episode of Deep Space Nine so far.

The teleplay is by Mark Gehred-O'Connell, who also wrote "Second Sight" and would later contribute the storylines for "For the Cause" and "Who Mourns for Morn". If I had been in charge of the series I'd have never taken his phone calls again. Of course he can't take all the blame. He's working from a storyline by Hilary J. Bader and Evan Carlos Somers, so they should hang their heads in shame as well. Rather oddly it's quite well directed by Jonathan Frakes, but as the saying goes: 'you can't polish a turd'.

Terry Farrell also puts in a lot of effort, but it's all in vain. It's always ridiculous when Star Trek attempts these sorts of whirlwind romances, where two characters meet, fall desperately in love and have a tragic separation, all in the space of 40 minutes. We know from the get-go that Dax is never going to leave Deep Space Nine, so there's no tension here. It's just a matter of drumming our fingers and waiting for her to stop kissing.

If there's one nice thing to say about this episode it's that it features the Star Trek debut of Jeffrey Combs. Even better, he's given many more chances to appear in the series after this episode, in much more interesting and less skeezy roles: Liquitator Brunt and Weyoun in Deep Space Nine, and the Andorian Commander Shran in Enterprise. He's wasted here. He puts in one hundred percent, but it's effort put into a lost cause.

This is the kind of episode that I watch so that you will never have to. It leaves Season 3 with six good episodes out of eight, and a quality ratio of 75 per cent.
Posted by Grant at 11:12 AM