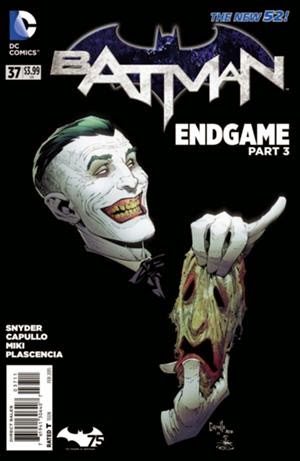 Since DC relaunched their entire superhero line with the New 52, one of their consistent standouts has been Batman. Scott Snyder has been writing some outstanding storylines, most recently his epic "Zero Year", and Greg Capullo and Danny Miki have been doing career-best work with the art. Now they're three issues into "Endgame", which features the eagerly anticipated return of the Joker.

It's a great take on the character. In his last appearance, "Death of the Family", he was going out of his way to prove how important he was to Batman. Now he seems to be entirely out for revenge. It's a much darker, creepier version of the character than we usually get. In one scene he pays Jim Gordon a visit, and it's pretty much the most unsettling I think the character has ever been.

Capullo and Miki draw him brilliantly as well. His face, famously cut off in Detective Comics #1, is back - although quite how has not yet been explained. His old pre-New 52 look is gone, and he now looks a lot more realistic with a sort of vague 1920s kind of a haircut. The more realistic take is part of what's making him look so disturbing here.

Either in monthly instalments or collected into trades, Batman has been such a standout for the past three years. I really hope the creative stick around, and that "Endgame" doesn't refer to their tenure on this excellent comic. (5/5)

If Batman versus Darkseid in a fistfight doesn't excite you, then I'm not sure why you're reading a bunch of comic book reviews. "Robin Rises" reaches its penultimate issue here, and it's a brilliantly exciting climax that left me very happy. I'm particularly pleased with Gleason and Gray's artwork, which is solid and expressive month in, month out, without then taking a single break in the past three years. There's one more instalment to go for Christmas Eve; I can't wait to see how things end. (4/5)

After last issue's partial recovery this issue feels like another setback. It's not bad so much as aimless, failing to strike out in a new direction and instead sort of muddling about for 20 pages. For a while there this was a really strong book, but now that the urgency has been drained out of it it all feels fairly tedious to read. I'm particularly disappointed in writer Tim Seeley: he's better than this. Hopefully next issue will pick up again and not stall and splutter still further. (2/5)

Batwoman fights with Etrigan the Demon, which is entertaining I suppose - although Marc Andreyko's attempts at rhyming are pretty weak it must be said. This book continues to stagger along in its half-hearted attempt at a rebirth as a superhero team, even with cancellation bearing down upon it. I can even see DC attempting some kind of Batwoman supernatural team relaunch, which will be probably be as poor a seller as Aquaman's team book was. This issue isn't bad, but it is rather underwhelming. (2/5)

With her handler shot and in hospital, Natasha gears up to fight back against the mysterious organisation that has been hunting her down. I am mostly happy with this book. The script is strong, and the Phil Noto artwork is simply stunning to look at. To be completely honest, this is probably the best Black Widow monthly that Marvel has ever published. I have one criticism, and that is that it's just a little bit too slow. Too little is happening to push the overall plot forward, and it's beginning to wear me down month by month. (3/5)

Selina Kyle's journey from cat burglar to Gotham City crime overlord continues for a third issue, and I am genuinely impressed at the direction in which Genevieve Valentine takes the character. Punches I expected to be pulled are smashed through with full force, leaving Selina with her hands much dirtier than I would have anticipated. I'm still not keen on Black Mask as the book's villain, but to be honest the political machinations of Gotham's crime families has been entertaining enough for me not to mind. Garry Brown's artwork continues to impress. A shout out too to translator Stephanie Lai for an effective Chinese poem that introduces the issue. (3/5)

I was expecting Miles Morales' long-delayed reunion with his father. Instead I got a prolonged and to be honest unconvincing flashback of how Miles' father wound up working for Nick Fury. Who'd have guessed. I'm conflicted: I love Miles as a character, and Bendis' dialogue and character work continues to be top-notch. On the other hand I simply don't care about this story any more. It's gone on for too long, and it's glacially slow - to the point where I actually can't remember what's going on any more from issue to issue. (2/5)

What a contrast from one book to another. Ms Marvel continues to be one of Marvel's strongest new books, with an entertaining plot and the most engaging new protagonist in years. G. Willow Wilson is going from strength to strength on this book, with great dialogue and plenty of humour. I've written at length about what a great character Kamala Khan is, but it's worth highlighting just how much of that appeal comes from Adrian Alphona's wonderful artwork. It's rich in character and warmth, and sells the tone of the book extraordinarily well. (4/5)

This issue of Multiversity doesn't quite feel as much of an epic event, but it does provide a charming old-school adventure for Captain Marvel and his friends. The real story here isn't Grant Morrison, who writes a fairly by-the-number story of inter-dimensional hijinks and time travel, but Cameron Stewart, who brings it all to life in a wonderfully vivid style. This is just flat-out beautiful superhero art. (3/5)

The Wicked + the Divine's first five issues told a brilliant story of reincarnated gods being treated like rock stars in present-day Britain. The second story arc kicks off here, with one god dead and her greatest fan teetering on the edge of the unknown. This really does feel like the sort of book DC Vertigo would have published 10 years ago: intelligent, well-paced, and richly developed. Jamie McKelvie's deft artwork expresses the emotion of the characters rather wonderfully. (5/5)

I've now read three issues of this comic, and while it's well written and impressively illustrated for some reason it doesn't quite grab my attention. There's great horror imagery to spare, good dialogue by Scott Snyder and effective artwork by Jock. Despite all of these ingredients, the final comic simply isn't grabbing my attention in the manner that it should. I wonder if the problem is structure: this might be the sort of comic that reads more effectively in trade paperbacks than single issues. I may give it another issue and then re-read the first four all in one go to see if things improve. (3/5)