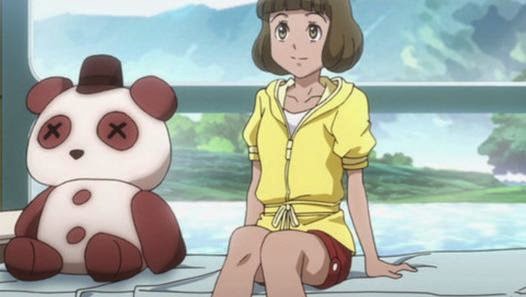 Marika returns to school following her piratical adventures chasing the Golden Ghost Ship. In her absence she has become a local celebrity. Her life is complicated when Princesses Gruier and Grunhilde turn up, freshly enrolled at Marika's high school and keen to continue their friendship.

Just when you thought the Golden Ghost Ship saga was over, there's this odd little epilogue tacked on at the end. It delivers mixed results. On the one hand it works as a bit of a palette cleanser between the first half of the series and the second. It also shows Marika having to deal with a rapidly growing reputation among her classmates. On the other hand I felt rather done with the Serenity princesses, and to have them return just one episode after leaving feels really bizarre and a little bit unwelcome.

It's good to see the school yacht club again, since they played such a pivotal role in the first story arc. It's also good to see Marika embedded back among school friends and living the sort of life she was enjoying right back at the beginning of the series. Some faces seem missing - I particularly missed the deadpan Chiaki - but overall it's nicely played out and amiable.

The second half of the episode, in which Marika invites the princesses over for dinner, feels significantly less enjoyable. It even includes a comedy bit about people making inedible food, which is pretty much the hallmark of desperately unfunny comedy.

The biggest problem with the episode, however, is that it all feels so superfluous and unnecessary. It frankly doesn't feel like it needs to be here, and in an episode where several of the episodes have felt needlessly padded this is just another waste of the viewer's time. It's not dreadful, but certainly its first half is vastly superior to its second, and it left me feeling a little underwhelmed. I can't give this one my tick of approval, and that leaves the series with nine good episodes out of 13 - an overall ratio of 69%.
Posted by Grant at 11:00 AM