Doctor Who: "Into the Dalek" 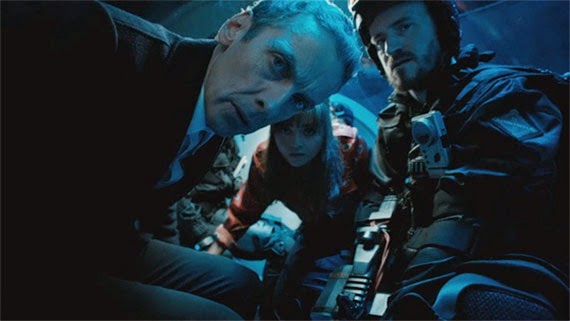 The Doctor discovers a rebel human spacecraft hiding in an asteroid belt from a Dalek saucer ship. Inside they have a Dalek prisoner, that for some reason has swapped sides and decided it is good. To find out what has gone wrong inside it's apparatus, the Doctor, Clara and a team of soldiers are miniaturised and head inside.

That all seems vaguely farcical when you try to type it into a one-paragraph synopsis. This isn't the first time the Doctor has been face-to-face with a solo Dalek, of course. Robert Shearman's exceptional 2005 episode "Dalek" covered that territory astoundingly well, and "Into the Dalek" recalls elements from it quite regularly throughout. This also isn't the first time the Doctor's been miniaturised and injected into someone's body, although for that first time you have to go all the way back to the 1970s and Bob Baker and Dave Martin's "The Invisible Enemy". I had a few flashbacks to that serial as well. Rather curiously, however, this episode also spends a remarkably large amount of its running time developing a new romance between Clara and fellow teacher Danny Pink, and those scenes reminded me quite strongly of Steven Moffat's earlier work including Press Gang and Coupling.

So it's all a bit of a stew, but if there's one thing Doctor Who handles masterfully it's pastiche - even if it's now hit the stage where it's making a pastiche of itself.

Peter Capaldi impressed me enormously last week, and here he seems even better. He's more secure in the role, and it's becoming clear that his awkward, impatient, rather grumpy portrayal of the Doctor is here to stay. If Matt Smith played the character as a very old man trying to be young, then Capaldi's playing as an old man too bored by people's stupidity to pretend any more. The Doctor is also continuing to struggle here with finding his moral centre, and I'm interested to see where the rest of the season will take that.

I'm genuinely surprised at how this new season is handling Clara. Last year I actively disliked both the character and Jenna Coleman's performance. This year she's making a much more positive impression. I'm still not wholly convinced, and there were still one or two lines this week where I failed to hear lines due to Coleman's rushed delivery of them, but she's vastly improved.

Part of the improvement has come from developing Clara's personal life outside of her time with the Doctor. She's an English teacher at Coal Hill School now, and we get to see the first steps in a romance between her and maths teacher (and Afghanistan war veteran) Danny Pink (Samuel Anderson). They share a great chemistry, and it's a relief to see Clara flirt with someone her own age and species for a change. I'm aware that Danny is a semi-regular character this season, so I'm keen to see where this goes. It's also genuinely nice to see Steven Moffat handle a bit of romantic comedy again, since he's rather good at it.

Guest star Zawe Ashton is good as future soldier Journey Blue. She's clear companion material, and while she doesn't leave with the Doctor at the end I kind of hope she gets a return appearance somewhere down the line. There's enormous opportunity to develop the character, and Ashton performed the role very well. Michael Smiley also guest stars as her uncle, Colonel Morgan Blue. His performance is pretty much what I'd expect from Smiley: serious, deadpan, intense, and so on. It wasn't a surprise to see him, given how often he's collaborated with the episode's director Ben Wheatley in the past. He also got me wondering if he was the first Northern Irish accent ever heard in Doctor Who. I figured he surely couldn't be, but then couldn't think of any other Irish characters in the series. If he's not the first, it must surely still be a rare phenomenon for the show.

The plot itself is actually rather slight, once you pull out the lengthy romantic comedy prologue and the various in-Dalek set pieces. This isn't such a bad thing, however, as it leaves plenty of room for the characters. Certainly the episode looks amazing. Ben Wheatley is a wonderfully talented feature film director, so it's no surprise that the Daleks look better in this episode than they possibly ever have before. The episode even squeezes in some Dalek versus human gunfights, which immediately reminded me of 1984's "Resurrection of the Daleks". This really was a pastiche-a-palooza.

It's very noticeable that the colour-coded Daleks of the Matt Smith era are absent. They always looked vaguely ridiculous, and I doubt many viewers will miss them.

Throw in a mercifully brief scene for the season's ongoing antagonist "Missy", and you've got a remarkably busy, visually impressive episode. I liked it a hell of a lot. Certainly it was a vast improvement over "Deep Breath". That gives Season 8 a quality ratio of 50%, but it's early days: this could go either way.