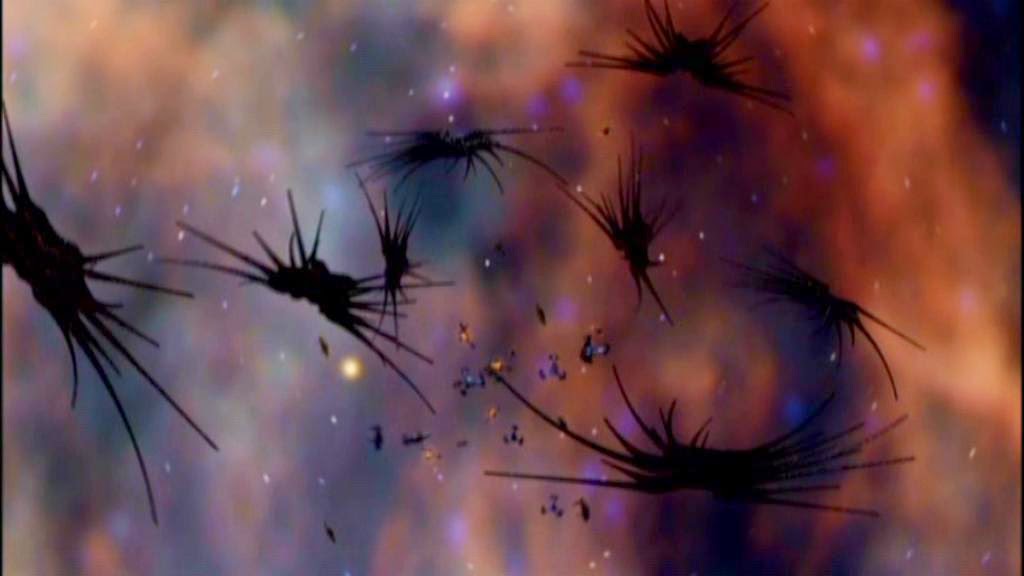 As is often the case, this is an episode of two halves. One of them, the fight against the Shadows, is a thrilling and extremely well staged space opera adventure. The other, Franklin's epiphany in the bowels of Babylon 5, is a trite and obvious exercise in cliché and stereotype. This is a pretty common situation with Babylon 5, and as always how the episode ranks in the end boils down to which half of the episode dominates. Thankfully this time around it's the good half that dominates the proceedings, with Franklin's predicament reduced to a minor irritation by comparison.

This episode must have cost Warner Bros a fair amount of money, because it's got a huge space battle during its climax. It's enormous, frantic and, despite the technical limitations of CGI 20 years ago, visually very effective. On a level of sheer visual spectacle, "Shadow Dancing" pretty much marks the climax of Season 3. There's finally a proper fight between the Shadows and the collected civilizations they threaten.

Before that battle kicks in there's a nice run of scenes as Ivanova and Marcus, onboard the White Star, lie in hiding to report on the Shadows' arrival. I'm not a fan of either character, but I have to admit they were pretty well played here.

Meanwhile Dr Franklin walks down the wrong corridor, interrupts the wrong fight, and gets badly stabbed in the gut for his troubles. As he slowly bleeds to death - Down Below seems pretty jam-packed most of the time, but he's somehow managed to find the one completely deserted corridor in the station - he finally achieves what he's been seeking for the past few weeks. He's found himself. By this I mean that he's found an irritating and poorly written hallucination of himself, who can be arbitrarily rude while dispensing pat and heavy-handed comments on how he's lived his life so far. It is so irredeemably clichéd. By episode's end he's up and ordering his old medical team around, so to be honest apart from kicking a drug habit I'm not sure what else's achieved, or what he did that couldn't be done with some proper rehab and the support of his colleagues.

The episode ends on a cliffhanger, with Delenn's spiritual watch over Sheridan as he sleeps (it's a Minbari thing) interrupted by the return of Sheridan's presumed-dead wife Anna (Melissa Gilbert). It's a great cliffhanger, although the final line of "I'm Anna Sheridan - John's wife" does kind of push the scene from shock ending into farce. I half-expected the next episode to begin with slappings and pulling of hair like a bad daytime soap.

All up, however, a very thrilling and climactic episode. All that's left for Season 3 is for Sheridan to find out how his wife is on the station, five years after she died. We're 21 episodes in and 14 have been good: the quality ratio is back up to 67%.
Posted by Grant at 7:27 AM