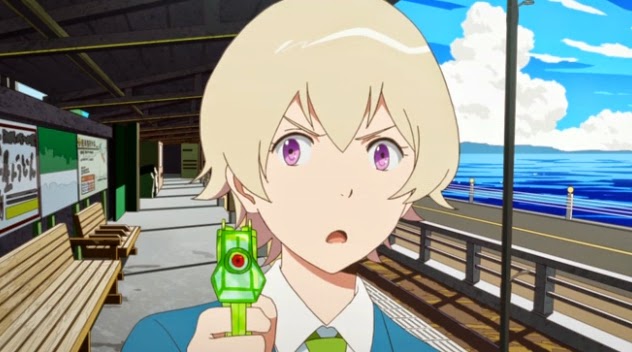 There are a lot of ways in which a new anime can attract my attention, chief ones clearly being a good story and high quality animation. They can also grab me simply by being bug-eyed wierd.

Tsuritama certainly qualifies. It appears to follow three teenage boys: one a grumpy fishing champion, one a new boy in town with a severe anxiety disorder, and the other one a blonde, purple-eyed kid with a goldfish bowl on his head who insists that he's an alien. They appear to be under surveillance by a strange secret agent holding a duck. Of course being weird only gets you so far, and the jury is still out on whether there's enough beyond the strange premise to actually make Tsuritama a worthwhile experience.

Our star is Yuki, who's just moved into town. He has bright orange hair and panics in pretty much every situation. This rising panic is visually expressed by Yuki drowning in water, which is a beautiful image and one that this episode exploits wonderfully. He also makes weird demonic faces when panicking, which is commented upon several times by other characters. I'm not entirely warming to him yet: the water visuals are masterful, but I can see his panicky schtick getting tiresome before too long.

Haru, the blonde alien kid, walks a fine line between being funny and being slightly creepy. I liked this a lot. He's engaging, bright, energetic and just enough to the left of field to be enjoyably unsettling. He has a water pistol that appears to give him mind control powers. He also talks to the goldfish in his bowl, who appears to talk back. Is he actually an alien? Right now it's hard to say, but it could go either way.

The third member of the trio is Natsuki, the "Fishing Prince". He falls broadly into a standard anime trope: deadly serious, stoic to the point of being rather grumpy, and with the obligatory black hair. The episodes climax sees him go fishing with Yuki and Haru, and given the focus and detail given to the fishing scene I'm wondering if fishing for sea bass is going to become a key part of the series. Certainly if the sport is popular enough for Sega to produce a highly successful gaming franchise out of it, it can probably accomodate a 12-part anime as well.

I have no idea what's going on with the turban-wearing secret agents, who are commanded by a man with a duck. I assume future episodes will let me know.

Visually the series is quite colourful, with simple designs and a beautiful seaside location. The music is a little grating at first, but I eventually succumbed to its twee charms. Certainly the whole thing was funny and weird enough for me to enjoy it, but I have absolutely no idea what's actually going on. I'll let you know.
Posted by Grant at 8:53 AM