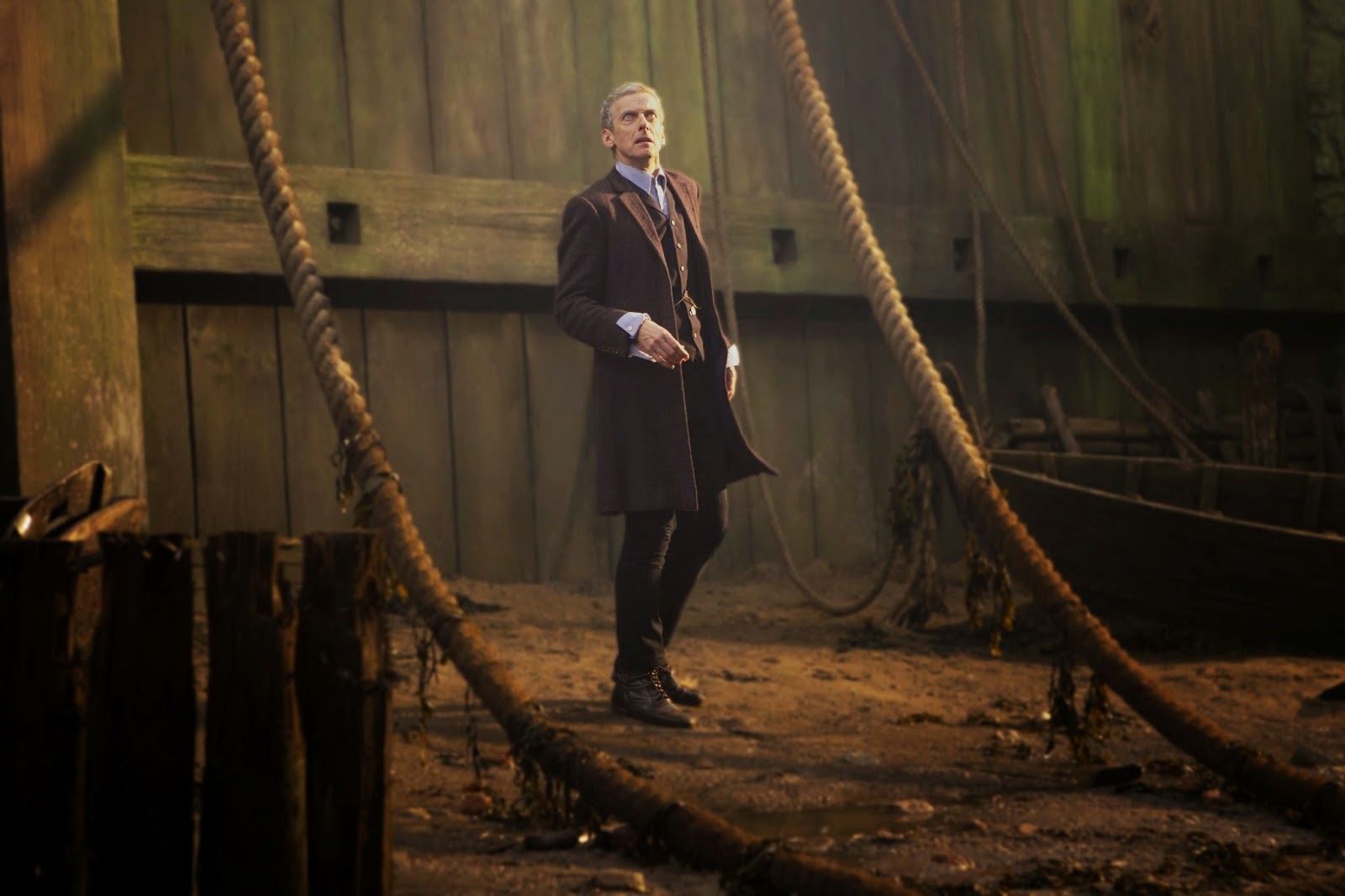 Doctor Who is back, for its eighth season since 2005, with an all-new lead actor in the shape of Peter Capaldi. There's a Tyrannosaurus Rex loose in 19th century London, and it's just coughed up the TARDIS, with a new and disorientated Doctor inside. Shenanigans ensue. Dark forces are at work. Clara doesn't know if she can trust the Doctor any more. And so on.

There's always a huge amount of pressure on Doctor Who when change comes. People who liked the old Doctor didn't want him to leave. People who hated the old Doctor are desperately hoping the new one will be better. Everything the series has been and is doing gets shoved under a microscope by the series' fans: what's changed, what's working, what's not working. Doctor Who fans can be incredibly loyal, but they can also be savagely critical at the same time. Expectations can be an absolute killer.

So what did I expect?

I came to "Deep Breath" as a fan of Matt Smith's 11th Doctor, and also as a fan of writer/producer Steven Moffat - although I think that, like Russell T Davies before him, Moffat's best work was actually done before he took over Doctor Who. I was happy for Smith to move on after three seasons, and was more than ready for Moffat to pass the reins over to a new, enthused writer/producer to keep the series kicking on for the next few years. I also came to "Deep Breath" very ready for companion Clara Oswald to move on. I am not a fan of the actor who plays her - Jenna Coleman - and often struggle to understand what she says on screen.

I was also a fan, coming in, of new Doctor Peter Capaldi. I first remember seeing him playing a transvestite murder witness in Prime Suspect, then as the Angel Islington in Neverwhere, and more recently in The Thick of It, Torchwood: Children of Earth and In the Loop. I had very high hopes for how he'd portray the Doctor.

He portrays him magnificently. This is a wonderful version of the character: much sharper and more impatient,and it seems from this episode more of a serious character with silly bits around the edges than a silly character who, from time to time, would get serious. He nails the character's age, depth and most of all his runaway, hyper-intelligent arrogance. If he continues to develop along these lines I strongly suspect he's going to be a fan favourite. He's already one of my favourites and he's only been in the part for a few minutes. He gets quite a lot to do this episode too, which is one of the benefits of its extended running time. His final costume is marvelous: more than a hint of Pertwee with an immediately recognizable silhouette.

Jenna Coleman actually gets some reasonable stuff to do this episode, as Clara struggles to reconcile this acerbic, difficult middle-aged Scot with the younger, more pleasant Doctor with whom she's travelled for the past year. Coleman performs these scenes well, although I did still miss several of her lines due to a garbled delivery. A slightly bigger problem is understanding why the Doctor's regeneration is such a shock to her, since only two episodes ago she was freely hanging out with three incarnations of the Doctor at the same time. It works within the context of the episode, but not within the broader context of the series.

The Paternoster Gang get a return appearance, and it's clear that Moffat has a great deal of affection for them. Of the three Jenny actually gets the best moments and lines, whereas Vastra convinces in fits and starts. Strax is a character that is really struggling. He was written best in his debut appearance: a Sontaran soldier so disgraced he was forced to become a medic. These days he's basically a mouthpiece for the same two jokes, and they're jokes we've had repeated on too many occasions to find funny any more.

As far as the episode itself goes, it can be broadly split into two halves. The first half is interminable, punctuated by weak jokes, slapstick humour and - to me a kiss of death for a television drama - comedy sound effects. Once the plot gets the Doctor away from his companions, however, it picks up remarkably. One scene midway through the episode, with Clara finally reuniting with the new Doctor in a restaurant, is the episode's strongest, and points to a really solid relationship between the two characters.

The second half is generally very entertaining, and nicely creepy in places, although it's let down by the odd sexual innuendo (these are getting insanely tiring to sit through) as well as what feels like some reheated tropes in Moffat's writing (replace "don't blink" with "don't breath" and you've written half of the episode).

The first of the episode's epilogues is rather sweet and touching, whereas the second is both confusing and more than a little irritating. I have no idea who "Missy" is - although I have one early theory - but I'm already happy to never see the character again. It's probably an unfair judgement this early, but I really did wince at Michelle Gomez's performance and dialogue.

This episode also debuts a new rendition of the opening theme, which so far seems remarkably unpopular. I liked it.

So in the final analysis, the episode didn't convince me. Capaldi is great, and despite my expectations Clara seems rather improved. The plot doesn't really hang together, however, and the ill-judged attempts at comedy really drag the piece down. Hopefully next week's episode is an improvement: they've certainly got the regular cast firing on all cylinders. The series just has to catch up with them.
Posted by Grant at 9:05 PM