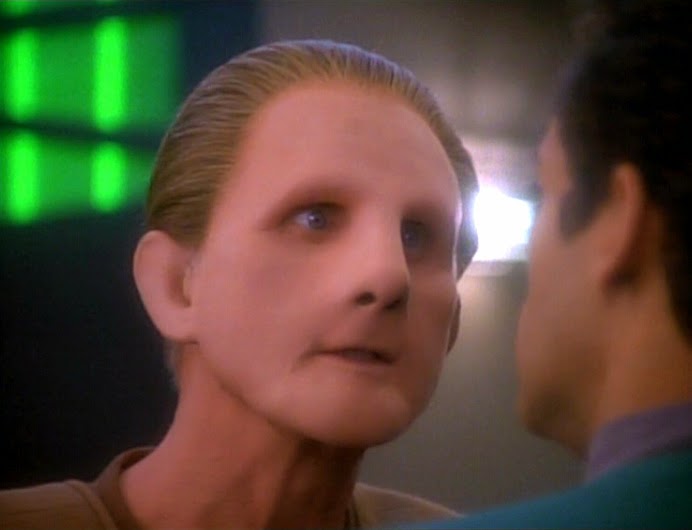 A Klingon starship returns through the wormhole months ahead of schedule, only to promptly explode. Its one survivor dies soon afterwards, claiming 'victory'. As the Deep Space Nine command crew go back to their regular duties, a rift starts to grow with Major Kira on one side and an increasingly paranoid Commander Sisko on the other. What is driving the crew to conflict, and why is no one but Odo acting normally?

There's a neat conceit at the heart of "Dramatis Personae": a sort of psychic virus, picked up by Klingons on a faraway, long dead plant, taken back to DS9 in their minds and then transferred to everyone in ops at the moment of the last Klingon's death. Infected by this alien energy, the command team all start replaying an ancient alien conflict - rationalising their feelings to however their present situation accommodates them. It's not perfectly executed, but it is intriguing enough to pull through.

It's also rather bold to tell a story where everyone is acting strangely so soon after the series has started. It works perfectly well, but it's an odd contrast to the previous episode - where the writers were clearly nervous enough about the new show that they were still using Next Generation guest performers to bolster its chances. I vastly prefer this version of Deep Space Nine, that takes chances and writes a little more boldly.

With the humans and Bajorans all acting weirdly, the episode gives another opportunity for Odo and Quark to share some screen time. It's such an endearing relationship, part adversarial and part genuinely comfortable. It may not stretch as far as actual fondness, but it's a relaxed affair with a wonderful sense of play about it.

The rest of the cast get to play around with their characters a little. It's an opportunity for Avery Brooks to get very intense and theatrical, and for Nana Visitor to play Kira a little more seductively. It's interesting that the character's attempts to win Dax to her side are aggressively sexual: this side of Kira comes up in the mirror universe episodes down the line, but it starts here. Colm Meaney is particularly good, with O'Brien becoming not just paranoid but racist as well. It's rather unpleasant but very well played.

There's only one big criticism to be made with this episode, and that's how it makes it very clear early on that everyone is acting out of character. A lot of mileage could have been gained by making the personality transformations a little slower and more subtle. These are new characters. They don't necessarily get along. We're early enough into the series that an episode where genuine fractures between Starfleet and Bajoran personnel could still happen, and it's a shame they didn't try stringing the audience along a little before revealing the alien virus.