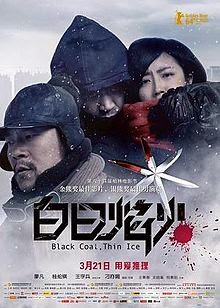 A police officer in a northern Chinese city is the sole survivor of a horrifying shoot-out that leaves both criminals and his fellow officers dead. Five years later, he is an alcoholic security guard. A former colleague drags him back into the fold when his last police case, long thought closed, suddenly swings open with a fresh string of murders.

Black Coal, Thin Ice, directed by Diao Yinan, takes a well-worn film noir narrative: the beaten-down detective falls for the femme fatale who may have murdered several men. It then re-tells that narrative in a bluntly realistic fashion. The characters act like real, three-dimensional people. The violence, when it occurs, is confronting in its matter-of-fact bluntness. The surroundings, a Chinese coal mining town, give it all a highly distinctive edge. It might be an overly familiar story, but it's a striking execution of it.

Liao Fan plays Zhang, the cop-turned-guard who rapidly finds himself deep in a complex mess of secrets and lies. He may be a worn-out wreck with a serious alcohol problem, but it doesn't take long for his innate detective skills to kick in. Some of them are a bit rusty - within a day of starting his surveillance of the potential murderer, she's quietly handing him notes telling him to stop following her - but his instincts are dead-on. He's a wonderfully flawed character, and Liao Fan deservedly won the Silver Bear Award in Berlin for playing him.

Taiwanese actress Gwei Lun-Mei is equally good as the sad-eyed Wu Zhizen. She could be a victim, or a murderer, or an innocent bystander, and Gwei does a remarkable job keeping the audience guessing throughout the film. She creates a remarkable character, both sympathetic and suspect.

Diao Yinan does a masterful job exploiting the film's wintry setting. One sequence in particular, with the characters leaving a skating rink with their skates still on, quietly gliding further and further into the darkness, is like a master class in rising tension. The film is very starkly shot: there are no camera tricks or flashy cinematography: Diao keeps his camera on the action and the characters.

When the film erupts into gun violence, it is undertaken in a remarkably realistic fashion. An early shoot-out takes place in a hair dressing salon. Maybe eight shots are fired in total. There's no flashy photography, no musical score. Just people shooting guns, and people getting shot. I was physically unnerved by the end of it.

This is a tightly wound, well characterised crime thriller that had me hooked from the first moment to the absolutely beautiful denoument. It's Diao's third feature film as director, following Uniform (2002) and Night Train (2007). It's made me very keen to track his earlier features down.
Posted by Grant at 9:08 AM