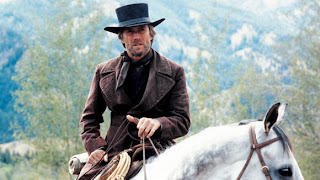 This is an old review I wrote back in 2009, but it's a good movie and deserves being talked about again. Hope you enjoy it.
A small community of Californian gold miners find themselves persecuted by a rich local banker with a jealous eye towards their claim. There’s a violent raid one morning. A teenage girl’s pet dog is killed. After burying her pet, the girl prays for God to send a “spirit of vengeance” to avenge her loss and drive away the banker and his men. The next day, a solitary rider arrives in town – a nameless preacher who unites the embattled community and inspires them to fight back.
I have an enormous love for westerns that I don’t often talk about. I love the mystique of this big, dusty, ridiculously fictionalised vision of American history. I think it’s sad that an equivalent bushranger genre didn’t take off here in Australia, because it probably would have been just as fun.
I love grim men in broad-brimmed hats, riding horses and training revolvers on one another. I love – when they’re shot like a western should be – beautiful North American vistas. I’ve never particularly wanted to visit the USA for its people, but I’ve always wanted to visit just to look at the landscape they live on.

Pale Rider, released in 1985, was Clint Eastwood’s first western in nine years. He hadn’t appeared in once since The Outlaw Josey Wales, back in 1976. Pale Rider also marked Eastwood 30th year performing in the genre that had made him a household name, first in the US television series Rawhide and then in Sergio Leone’s much acclaimed “spaghetti” westerns (A Fistful of Dollars, For a Few Dollar’s More and The Good, the Bad and the Ugly).
It was the Eastwood westerns, first via Sergio Leone’s films and then in ones by Ted Post, Don Siegel and Eastwood himself, that spearheaded a progression in the genre. The western was able to become a much darker and more cynical experience. The lines between the hero and the villain were allowed to blur, and sometimes be removed entirely.
Eastwood represents probably the final major paradigm shift for the western. By the end of the 1970s the genre was shifting into pastiche and parody. Movies such as Blazing Saddles (1974) and Silverado (1985) fed on the western’s tropes and popular images without contributing anything new of their own. In essence the western had started to eat itself – consuming past tropes with a knowing wink, but not leaving anything new on the table bar a sort of post-modern self-awareness. More recent productions such as Kevin Costner’s Open Range (2003) and David Milch’s television drama Deadwood have merely extended the road Eastwood and Leone were already carving. 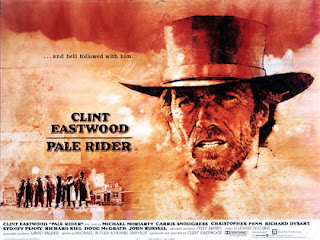 It’s perhaps surprising that after waiting almost ten years to return to the western, Eastwood chose such a traditional and largely by-the-numbers story. The miners under threat, the rich banker threatening them and the deadly gunslingers hired from out of town are all very familiar elements, and for the most part the film unfolds precisely as you would expect it to. In fact it’s remarkable how much the movie apes George Stevens’ Shane (1953). It’s a curious sort of pseudo-homage, close enough for you to notice but not quite precise enough to seem deliberate. The western is a relatively formulaic genre – it could all be an enormous coincidence.
At the centre of the film is Eastwood’s grizzled preacher, full of angry silences and ominous pauses. Like most of Eastwood’s performances, it’s a marvellous exercise in restraint. It can be argued that since A Fistful of Dollars Eastwood has been pretty much playing the same character, and it’s definitely the one he plays here. The preacher is a sparse, lean character stripped of all superfluous elements – including a name. ‘Who are you, really?’ the preacher is asked shortly before the film’s climax. ‘It doesn’t really matter, does it?’ Eastwood replies, before riding off to do what he does best.
That said, it is somewhat surprising that in Pale Rider it takes Eastwood a full 73 minutes to fire a gun. He doesn’t have to. He’s dragging the full weight of a 30 year legacy behind him. By the time the final bloody shootout occurs, his audience has been waiting almost a decade to see him engage in a gunfight again.
Pale Rider also evokes Eastwood’s own 1973 western High Plains Drifter in that it edges the unreal. It doesn’t edge very closely to it, but it adds an unexpected wrinkle to the picture. Several times during the film people take their eyes off the preacher for a moment, only to glance back and find him gone. It’s done in a way that feels one step beyond the usual fast-footed and stealthy protagonist. It feels unbelievable, even supernatural. On top of that there’s the preacher’s convenient arrival in town immediately after the grieving Meagen (Sydney Penny) wishes for a Book of Revelations-style avenging angel to come and defeat the villainous Coy LaHood (Richard Dysart) once and for all.
When the preacher learns that LaHood has called in a rogue sheriff from out of town, he remarks that he’s heard of the man before. When the sheriff learns of the preacher, he’s reminded of a man he killed some years previously. When the two meet face to face, the sheriff recognises the preacher with terror – yet we’re never told who or what he is.
The horror and western genres fit together wonderfully, and in many respects it’s a bit of a shame that this angle wasn’t pursued further.
Pale Rider was Eastwood’s second last western – he followed it some years later with the widely acclaimed Unforgiven. In many ways I think Unforgiven has overshadowed it. There in the shadow it remains, lost between the classic Eastwood westerns of earlier decades and the final definitive statement that Unforgiven represents.
Posted by Grant at 7:32 AM