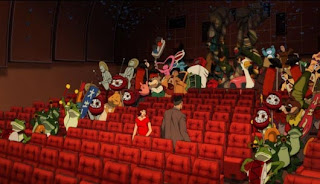 This was originally written and presented as a reading at Aussiecon 4 in September 2010. Writer/director Satoshi Kon had recently died, and I felt like commemorating him in some way.

‘It’s the greatest show time!’ announces a clown as they impossibly squeeze out of a tiny automobile. A circus ring seems like an incongruous place to begin a science fiction film, but before long we are following a middle-aged police officer from circus to corridor to train and beyond, without explanation or logical sense. We are in a dream, and that dreams is being subtly controlled and manipulated by a machine: the DC Mini.

It sounds quite a lot like Christopher Nolan’s 2010 mega-hit Inception, in which surveillance experts use technology to enter other people’s dream-states and steal their ideas. This, however, is Satoshi Kon’s Paprika, an animated film from Japan that pre-dates Nolan’s work by four years and is – arguably – the superior film.