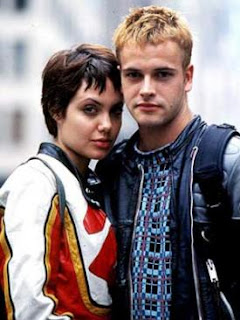 At the start of Hackers, eighteen year-old Dade Murphy has spent seven years legally barred from using a computer after a hacking incident when he was eleven. Back at the keyboard, he dives straight back into cyberspace as Zero Cool. When he encounters Kate Libby, aka Acid Burn, their battle of the sexes extends both on and off the computer. The two must put aside their differences, however, to prevent a master hacker known as the Plague from crashing a corporate network and stealing $25 million dollars.

Screenwriter Rafael Moreu first encountered the concept of ‘hacking’ while studying at college. ‘I was immediately intrigued,’ he said. ‘When people become so obsessed by a single activity, there has to be a story, and I wanted to investigate further.’
Moreu’s investigations brought him into contact with several of America’s most talented and notorious computer hackers, several of whom were already under surveillance by the police for illegal activities. Moreu compared the phenomenon to a 1960s-style counterculture revolution. ‘These kids were beginning to realise that they’d been handed the keys to the kingdom, and now had to deal with the responsibilities that came with it.’
Rather than write a direct and fact-based depiction of hacker culture, Moreu elected to exaggerate the phenomenon into a strange, slightly self-aware version of reality. The film may have been titled Hackers, but the characterisation and technology was vastly different to what one might encounter in the real world. ‘I wrote my own “screenplay hack”,’ Moreu argued, ‘a kind of Trojan Horse program, where I could present these more serious issues in a script that also delivers the hackers’ inherent sense of anarchic humour.’

British director Iain Softley signed on to helm Hackers as his follow-up to the critically acclaimed biographical picture Backbeat, which focused on Stuart Sutcliffe and the early days of the Beatles. He claimed to be intrigued by ‘the idea that here was a phenomenon that today’s generation has latched onto in the way that their predecessors latched onto rock’n’roll. I think their agenda is simply to have fun, to do what they want to do and not allow anybody to tell them what not to do.’ He added: ‘The irony is that the biggest crime – one that could unravel the whole of modern society – could conceivably be perpetrated by a kid in his bedroom with some fairly basic equipment. It's funny, but there’s an inescapably serious side to it.’
That said, Softley definitely had his eye on making an engaging, populist film. ‘One of the things I tried to bring to the movie was the sense that here was a colourful, passionate, sexy, energetic, fast-paced, adrenaline-driven world that audiences would want to visit for a while.’

Casting was undertaken in the USA and London by casting directors Dianne Crittenden and Michelle Guish. A search for two talented unknowns to star in the film resulted in casting of English actor Jonny Lee Miller (Dade) and American actress Angelina Jolie (Kate). Both actors would later become major stars: Miller through British films such as Trainspotting and Plunkett & Macleane and Jolie through an increasingly large array of hits including Girl Interrupted, The Bone Collector, Lara Croft: Tomb Raider, Wanted and Salt.
Angelina Jolie was not the only actress to be seriously considered for the role of Kate. Iain Softley also considered Katherine Heigl, who became unavailable once she signed on to Under Siege 2, as well as Liv Tyler, Hilary Swank and Heather Graham.
Both Miller and Jolie spoke with a number of real-life computer hackers. Jolie said ‘I talked to a lot of male hackers who told me that, even though it’s changing, very few hackers are women, so it’s difficult for them to fit in. I think that's why Kate is so strong-willed and disciplined: she knows she's good, but she feels she has to be tough to be accepted as an equal.’
Other members of the primary cast included Jesse Bradford (Swimfan, The West Wing) as hacker wannabe Joey, Matthew Lillard (Scream) as Cereal Killer, Laurence Mason as Lord Nikon and Renoly Santiago as Phantom Phreak.
The lead cast were all sent for typing and computer classes (Jolie in particularly did not like or use computers in her day-to-day life), as well as training in using rollerblades for scenes when the characters would use them to travel through the streets of New York.

The villain, a master hacker nicknamed “the Plague”, was played by Fisher Stevens (Short Circuit). The Plague’s accomplice Margo was played by Oscar nominee Lorraine Bracco (The Fisher King). ‘I wanted to do the role,’ she said, ‘because I had met Iain and had seen Backbeat, which I thought was brilliant. It was a different kind of role for me, I don’t usually get to play the villainess, so this was fun.’

In an early nightclub sequence Dade and Kate competed against one another on what appeared to be a state-of-the-art futuristic videogame. The game in question was actually Wipeout, produced by English developer Psygnosis for the forthcoming Sony PlayStation videogames console. The game was inserted into the film as paid product placement. The game footage was specifically generated for the film at a higher resolution and quality than normal.
The nightclub itself was constructed inside a disused swimming pool in London – the production shoot was split between London and the USA.

In several visually intriguing sequences, Softley blends images of New York City with images of computer circuitry. Dade flies into New York and watches the streets below transform into circuit boards. In another scene towering supercomputers suddenly look like electronic skyscrapers. It’s a nice visual flourish, adding a little bit more complexity to an otherwise superficial and fairly silly film. Softley said ‘the visual treatment gave me the opportunity to create a fantastic, slightly hallucinogenic feel to the story.’
In a move echoing earlier computer-based films such as Tron (1982), the majority of the computer-generated sequences in Hackers weren’t generated by computers at all. ‘We used the more conventional methods of motion control, animation, models and rotoscoping,’ said Softley, ‘to create a real three-dimensional world, because, in my opinion, computer graphics alone can sometimes lend a more flat, sterile image.’
While the film was in pre-production, the filmmakers had consulted several real-life hackers over elements of the screenplay. Those hackers quietly passed copies of the screenplay onto other hackers, some of whom felt that the film was not only inaccurate but completely ridiculous. There was also the paradoxical issue of a major commercial studio bankrolling a film based around an actively anti-corporate ideology.
Days before Hackers opened in cinemas, a group of disgruntled real-life hackers hacked into and vandalised United Artists’ official website for the film. The studio’s official media release regarding the incident noted ‘we don’t approve of their trashing our website, but we are thoroughly impressed by their creativity and ingenuity.’

There is something appealing about Hackers that is initially difficult to pin down. In complete fairness it is not an exceptionally good film. The screenplay, so vocally reviled by real-life hackers, demonstrated a traditionally Hollywood misunderstanding of the subculture. The film is populated not so much by characters as by caricatures, strange exaggerated freaks who talk not so much dialogue as sound bites for the film’s theatrical trailer.
What Iain Softley has built onto the screenplay’s basic framework, however, is undeniably enjoyable. The film has been cast very well – particularly its two young leads, Jonny Lee Miller and Angelina Jolie. Jolie amply displays the screen presence that would, within 10 years, make her the world’s most successful movie actress. By contrast Fisher Stevens is dreadful as “the Plague”. In a film peppered with strange, over-the-top performances, his is the most ridiculous and exaggerated of all.
Iain Softley’s direction is tight yet breezy: Hackers is a silly film, but it’s certainly not a boring one. In comparison to 1995’s other tech-based computer thrillers (such as Jonny Mnemonic) it’s rather enjoyable. Softley has a nice visual eye, and the aforementioned blurring of real-world architecture and computer components is very nicely done. The film also boasts a great pop electronic soundtrack, including music by Orbital, Massive Attack, The Prodigy, Leftfield, Underworld and the Stereo MCs.

Hackers was released in US cinemas on 15 September 1995.
‘It would be nice,’ said Entertainment Weekly’s Own Gleiberman, ‘to describe the second feature directed by Iain Softley, who made the terrific Backbeat, as a noble failure; in fact, it's a dismal mess.’ Writing in the Washington Post, critic Hal Hinson described the film as ‘tirelessly modish, hyper-glossy, super-superficial. It's also cacophonous. And, for all of its drum-beating for brain power, dumb.’
By contrast, the Chicago Sun-Times’ Roger Ebert enjoyed the movie quite a lot. ‘The movie is well directed, written and acted,’ he wrote, ‘and while it is no doubt true that in real life no hacker could do what the characters in this movie do, it is no doubt equally true that what hackers can do would not make a very entertaining movie.’ In the end it was the San Francisco Chronicle’s Peter Stack who hit the proverbial nail on the head, describing the film as ‘a shamelessly lousy movie but a shamelessly good one, too.’

Following Hackers, writer Rafael Moreu only wrote one other produced screenplay – The Rage: Carrie 2. He was also associate producer on the 1997 dance movie The Next Step.
Iain Softley has continued with an eclectic directorial career, helming period drama (The Wings of the Dove, 1997), science fiction (K-PAX, 2001), horror (The Skeleton Key, 2005) and fantasy (Inkheart, 2008).
Posted by Grant at 7:47 PM

Email ThisBlogThis!Share to TwitterShare to FacebookShare to Pinterest
Labels: film, making of, USA