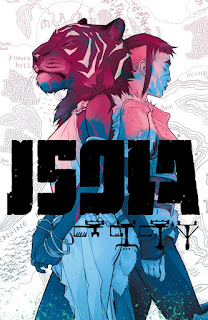 Have you ever noticed that for all the attempts to re-imagine and update Batgirl as an upbeat, positive-vibed superhero book, she always winds up mired in trauma and misery? Here she begins the story chasing after a serial killer supervillain named Grotesque, bemoaning how grim and awful he is - if only there was a publisher that could steer her back towards happier material? With the issue climaxing with Barbara entering some strange hallucination after the microchip in her spine is electrocuted, it all feels a little too similar to other Batgirl storylines from recent years. (3/5)

Flashback time, as Daredevil meets Misty Knight for the first time. This is all the way back when Ms Knight is an everyday New York City police detective with a form suspicion that vigilantes and superheroes are up to no good. Marcio Takara's artwork is strong and inventive, and well coloured by Marcelo Maiolo. It's a great done-in-one adventure; exactly the sort of thing that works best for an annual or one-off special. It's self-contained, easy to follow, and hugely entertaining. (4/5)

Kamala's powers continue to go haywire while she races to stop the Shocker from setting up a permanent hideout in New Jersey. While she struggles to maintain shape and size, Bruno races to school to find a cure in its science lab. This issue is high on comedy, and Wilson's script absolutely nails the tone and style. The laughs are well-matched by Leon and Herring's visuals, which are well-established by now and striking among other Marvel books. This is always such a great comic, but some issues are greater than others. (4/5)

Coming in right on the cusp of the monthly title's cancellation, this extra-length Poe Dameron adventure is a solidly enjoyable little heist adventure set shortly before the events of the Force Awakens feature film. Houser's script is good - certainly better than much of the ongoing title - Broccardo's artwork doesn't quite capture the look of the screen actors, but copes well enough. One big bonus: you can read this annual without reading the ongoing series. (3/5)
Posted by Grant at 3:45 PM