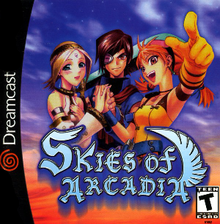 The player controls the pirate Vyse, who captains a flying airship while fighting against a tyrannical empire. It was largely a quite traditional role-playing game, with turn-based combat sequences, and the player improving characters' abilities by gaining experience points from each battle. The traditional style of gameplay made Skies of Arcadia (Eternal Arcadia in Japan) a natural hit for Japanese players, but its English-language port was surprisingly successful as well. For fans of Japanese-style RPGs it's a pleasure - although to be fair it is a bit heavy with random monster encounters and fights.

Sadly, despite its enthused acclaim at the time, Skies of Arcadia has not enjoyed much in the way of success in subsequent years. A Gamecube port was released to moderate sales, but a promised PlayStation 2 edition was cancelled. Sega confirmed at one stage that a sequel was in development for new consoles, but was not ultimately produced. A HD re-release has been teased but has not to date appeared on any platform.
Posted by Grant at 9:32 PM