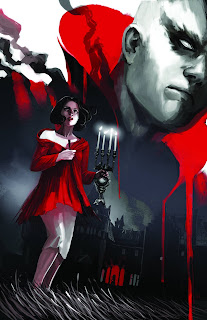 It feels like it has been a long time since DC Comics published a prestige format issue: 40 pages of story, cardstock cover, perfect binding. It used to be their signifier for something a little higher-profile and more out of the ordinary that their usual monthly releases. It's quite pleasing to see the format return this month in the form the luridly titled Deadman: Dark Mansion of Forbidden Love.

I'm a big fan of Deadman, aka the ghostly acrobat Boston Brand, who fights crime by invisibly observing criminals and possessing other people's bodies. He's been well overdue for some kind of revival, since I think the ingredients are all there to make him a fairly mainstream kind of a hit with the right material. This new three-part miniseries - which I have to say looks suspiciously like a repackaged six-part miniseries, publishing two issues at a time - could be a step in the right direction.

Written by Sarah Vaughn and with gorgeous art by Lan Medina and colourist Jose Villarubbia, Dark Mansion of Forbidden Love drops Deadman firmly into the gothic romance genre. There's a haunted mansion, a murder mystery to solve from more than a century ago, and a romantic spark between the paranormally-sensitive protagonist Berenice and the usually invisible Brand. In some ways Brand fits into the tropes of gothic romance perfectly, but in others he stick out sharply from it. He may have all of his ghostly trappings, but at the end of the day he is still a costumed superhero. It's an interesting contrast, and thus far plays very well. I'm keen to see how this bimonthly series goes. (4/5)

Under the cut: reviews of The Autumnlands, Batman, Giant Days, Nightwing and Revival.

The Autumnlands runs on a fairly haphazard release schedule, but when it turns up in my weekly order I cannot help but get excited. This issue seed Rusty and Learoyd scrambling through the half-destroyed mountain citadel just in time for God to show up. Clearly it is not a god, but it is another development to add to the growing number of questions over what the hell is going on in the Autumnlands. Benjamin Dewey's artwork continues to have a striking presence, while Busiek's script keeps things fast-paced and wonderfully dramatic. (4/5)

"Night of the Monsters" continues, as Batman's struggle to contain the monster epidemic takes a hit when both Gotham Girl and Nightwing are transformed into monsters themselves. While my caveats about this storyline continue to apply - it's basically filler - there are some neat touches in this fourth part, including Batman using Clayface as a super-powered sentient Batsuit. It's the sort of crazy over-the-top idea that tickles my fancy. This is a solid and entertaining issue, but it is ultimately pretty disposable stuff. I note DC are trying to expand it further - a Batwoman solo series reportedly spins off from this arc early next year - but at this early stage I just don't feel it's worth pursuing that far. (3/5)

It's the summer between semesters, and time for the obligatory music festival. Tents, booze, drugs, rain and mud abound in a mostly hilarious one-shot. My only real problem is with a small running thread about "the Cowboy", who spikes drinks in the attempt to get women to sleep with him. It's treated as a bit of a joke, and he receives a sort of karmic punishment by the issue's conclusion, but the bottom line is that this sort of thing isn't funny. To use date rapists as a joke requires one hell of a punchline to avoid coming across as crass, or even outright loathsome. Allison fails to do that, and it tarnishes the whole issue. (2/5)

Onto part 5 of "Night of the Monsters". This one actually felt like it was going somewhere, as the Bat-team's net tightens around Hugo Strange's plans and finally get the upper hand in defeating the monsters. It's odd that we're up to part 5 of 6, and now the storyline is suddenly getting an injection of depth and clever ideas. It's still all rather silly, but it has some meat on the bones now and that helps an enormous amount. I have a feeling the sixth and final part this week is going to get even sillier. (3/5)

Events really are gearing up to a series finale. For the entire four-year run two unsolved mysteries have hung over everything: who killed Em Cypress, and what caused the dead to start rising and returning to life. We now have an answer to the first question, and it seems that this discovery is now leading to an answer to the second. That's a huge development if you've been reading this story for 43 issues. Mike Norton's artwork continues to excel, as do Mark Englert's colours. I know the end is in sight, but I really hope this team stick together and move onto a new project or two. The work they're producing is just too good to leave with this one series. (5/5)
Posted by Grant at 9:00 AM