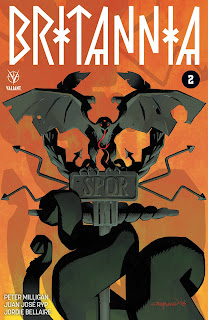 Britannia is two issues in, and it is already standing out as one of the most interesting books that Valiant has published. The current iteration of the imprint took pre-existing superhero franchises and re-invigorated them with good writers and artists, and it has since been slowly expanding that "Valiant Universe" into some interesting and provocative directions - the recent 4001 AD miniseries, for example, was straight-up science fiction of a style usually seen in Metal Hurlant. Britannia, on the other hand, heads firmly in the other direction. It tells a horror story in 1st century Britain, as a Roman investigator finds himself neck deep in Rome-versus-Britain violence and mind-warping demonic creatures.

It feels like a real break from the existing Valiant line-up, and not just a break but an opening: I am really keen for the company to keep pushing in this direction. New genres, strong writing and artwork, and handsomely packaged issues. This book doesn't just read well, it feels good in the hands. The paper is high quality, the colours are printed richly and it comes inside a beautiful matt finish cardstock cover. The content matches the packaging as well. The storyline is gripping and beautifully researched, the art is distinctive and atmospheric, and Jordie Bellaire's colours are some of the strongest work I've seen her do. This is a great comic book. (5/5)

Under the cut: reviews of Daredevil, The Sheriff of Babylon, and Southern Cross.

Daredevil has a new enemy: Muse, a masked homicidal artist who makes sculptures out of dead bodies and paintings out of blood. To track him down and bring him to justice, Matt needs the cooperation of the Inhumans - and their Queen Medusa is unwilling to help. So the good part is that Soule is writing a good script, and emerging nicely out of the pretty generic dark and gritty vibe with which he started his run. Muse is a great idea for a villain, and has solid long-term potential. The bad part is the Inhumans. Pretty much since the Marvel movies took off, and Marvel lacked the film rights to the X-Men, the company has been aggressively pushing the Inhumans are a replacement. The problem is that the Inhumans are kind of boring: their most viable character is Ms Marvel, who could have had any origin and still functioned identically. Worse than that, I honestly think the market doesn't like it when a publisher shoves particular characters down their throats: it feels inauthentic, and more than a little irritating. Even if a writer could find the potential of the Inhumans, I probably wouldn't listen or notice because right now I am desperately hating how Marvel is pushing them onto me like a street corner dealer. (3/5)

The Sheriff of Babylon #11

The penultimate issue of The Sheriff of Babylon contains more of the same two conversations that took place during the last issue. You would think that would make this a fairly boring issue and a fairly boring comic, when actually it's some of the best comic book writing and art I've read in recent years. The pacing is sublime, and the emotions run very high by the issue's climax. The sense of rhythm created by the book's layout is amazing. There's just one issue to go, but it's going to have to be pretty bad to avoid making The Sheriff of Babylon the best American comic of 2016. (5/5)

Kyril has barely arrived at the Romulus mining facility and already there's one dead body and a new boss on the station. The mystery of what has happened to the Southern Cross remains in the air as workplace politics turn violent and both Kyril and Eliza are in danger. This second arc of Southern Cross is striking: while the first was a sort of murder-mystery combined with an Event Horizon-style cosmic horror, these last two issues have been more like an industrial thriller. Andy Belanger's artwork seems particularly strong this month too. The trick going forward will be for Cloonan's scripts to begin feeding the reader some answers. Mysteries can only stretch so far. (4/5)
Posted by Grant at 9:10 AM