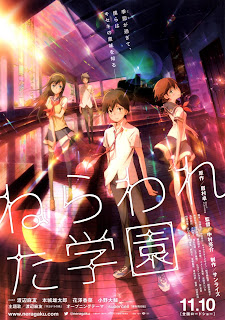 An Enoshima high school is visited by a new exchange student with unearthly psychic powers, who seems to be taking over and controlling the student body one by one. At the same time a short chain of unrequited love affects several of the students unaffected by the psychic control.

Psychic School Wars, which is directed by Ryousuke Nakamura and based on Taku Mayumura's 1973 novel, is one red-hot mess of an anime film. It combines an Invasion of the Body Snatchers thriller with a coming-of-age teen romance, and in doing so misses its mark in both directions. It is visually rather pretty, and its warm characters often manage to create some heartwarming moments, but its muddled narrative frustrates a lot more than it entertains.

Kenji Seki is the central character: a 14 year-old boy obsessed with his classmate Kahori and oblivious to the advances of his lifelong neighbour Natsuki. Kahori is, in turn, enamoured with the mysterious new transfer student Ryouichi. He turns out to be a psychic from a future in which the last surviving humans have retreated to the moon and desperately need to change history in order to avert an ecological apocalypse. Poor Natsuki sits at the beginning of the chain; she's hopelessly in love with someone without anybody to love her back.

The movie ambles along at quite a leisurely pace, focusing either on teen romance or a slow-burn science fiction thriller. It is ultimately much more successful at the former. This is partly because its characters are rather charming, and partly because its straightforward take on teen romance is a lot harder to foul up. The science fiction elements are piecemeal and rather confusing. One wonders if Nakamura's familiarity with the source material - it has already been adapted several times for film and television - led him to assume his audience would be well aware of the details. It's possible this is true for a Japanese audience, but it is certainly not the case for an English-speaking one. The climax is particularly frustrating.

One area in which the film excels is its colour design. It has a rich and vivid aesthetic that really makes the scenes pop off the screen. Nakamura does rely too much on computer-generated lens flare effects. They reach hilarious proportions throughout the film, giving American director J.J. Abrams a run for his money.

There is merit in Psychic School Wars, but a huge number of flaws as well. It is worth watching for the characters and the romance, but I'll be damned if the rest makes a lick of sense.
Posted by Grant at 11:46 AM