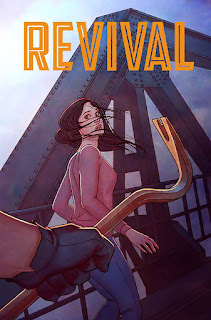 We are now well into the final act of Tim Seeley and Mike Norton's self-proclaimed 'rural noir', which means that everything has effectively gone to hell and all hope seems lost. The military seems set to simply execute an entire quarantined town full of people rather than risk letting the revived and the ghosts escape to the rest of the country. The atmosphere is palpable, and thanks to the long burn of this series it is emotionally well earned. As a special bonus this issue, one of the longest-running questions hanging over the series finally gets partly answered: we now know who murdered Em Cypress, now all that's left is the why.

Revival is a great series, and has been an absolute highlight of the Image Comics roster over the past four years. It's going to leave quite a hole in the schedule when it's gone. (5/5)

Under the cut: reviews of Bounty, The Fuse, and Kim & Kim.

Nina and Georgie are ex-criminals now masquerading as interplanetary bounty hunters. They're bringing home their latest quarry for a reward, but he seems to be a lot more important than they had been led to believe. Three issues in and I am liking Bounty without expressly loving it: there is plenty to recommend, in terms of strong characters and vividly colourful art (great job by Leonardo Olea), but it all feels a bit too frantic and insufficiently grounded for me to fully appreciate it. It's good, but it could be a lot better with a more solid foundation of story and character. (3/5)

Terrorists are plotting the assassinate the Fuse's mayor, and Clem's own son - and deputy mayor - Leo Zhirov has been implicated. This is, as always, whip-smart procedural police drama set on a space station orbiting the Earth. The plot is gripping and well-developed, the background detail is clever and evocative, and Justin Greenwood's artwork is distinctive and rich with character. This storyline has been doing a lot of twists that are actually foreshadowed well in advance; Johnston's scripts simply make it satisfying seeing how the cast react to the shocks as they occur. This is incredibly well written stuff. (5/5)

Kim & Kim is another science fiction comic following a pair of bounty hunters, in this case both named Kim. It is one of those quirky 'throw everything at the wall' titles, in this case featuring bar room brawls, hallucinogenic oceans, necromancy, giant sand worms and not answering your father's calls when he telephones you. The artwork is, by sensible standards, not great, but it tells the story effectively and it's well coloured by Claudia Aguirre. This is just a wonderfully charming book; the indie slacker alternative to Bounty. (3/5)
Posted by Grant at 9:08 AM