Star Trek: The Next Generation: "The Next Phase" 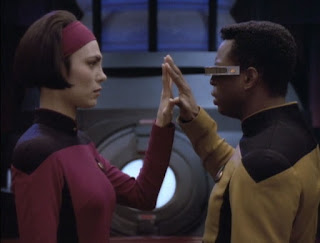 It is 18 May 1992, and time for another episode of Star Trek: The Next Generation.

The Enterprise comes to the aid of a crippled Romulan science vessel, but when transporting back to the Enterprise Lt La Forge (LeVar Burton) and Ensign Ro (Michelle Forbes) are seemingly killed. While the other officers mourn their deaths, La Forge and Ro are actually trapped out of phase with the rest of reality, and unable to communicate with their crewmates.

"The Next Phase" is a bottle episode that clearly got way, way out of hand, with a limited cast and setting - basically the Enterprise and one room on the Romulan ship - but a whole raft of expensive visual effects. It is effectively Ghost for Star Trek, with La Forge and Ro able to run through walls and solid objects, and listening helplessly as the other character fondly eulogise them. It has some nice action, a few clever ideas, and some moments of rather effective drama.

Pretty much every episode of The Next Generation is improved by Ro Laren turning up, and that is certainly the case here. Her caustic, cynical demeanour is a great contrast for La Forge's constantly upbeat optimism. She thinks they have both died and remain purely as spirits observing the material world. He's seeking a scientific explanation, and continues to insist they are phased out of synch with reality. Of course it's La Forge who's right - it would be a particularly weird episode otherwise - but it's a nice bit of material for Michelle Forbes to play that gives another level of character.

It's particularly welcome to see the episode continue to build on the relationship between Riker (Jonathan Frakes) and Ro. At the episode's outset he's harsh and skeptical of her behaviour as always. Once he thinks she's dead, he softens considerably - and of course Ro is able to see that.

The episode makes great use of its visual effects, showing Ro and La Forge passing through all manner of physical objects. Of course they have no problem with floors, which is kind of ridiculous if you pause to think about it - but of course without this particular contrivance there wouldn't be an affordable or sensible episode to make.

The effects are particularly well used during a climactic foot chase. It turns out Ro and La Forge are not alone - a Romulan officer was phased out of reality earlier and is now stalking them across the Enterprise. It's an effective shock to see him in a scene - presumably part of the physical world - before suddenly turning and walking through a computer console. The foot chase runs across an entire deck of the Enterprise, through walls and people until the Romulan is thrown through the side of the ship and into open space. It is all very well staged.

Perhaps a little slight, but still wonderfully entertaining, "The Next Phase" is another late highlight for Season 5. It is the 15th good episode out of 24, giving the season a quality ratio of 63 per cent with just two more episodes to go.
Posted by Grant at 5:01 PM