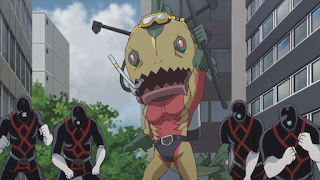 It is 4 December 2013, and time for the ninth episode of Samurai Flamenco.

It is three months after King Torture's attacks on Japan began, and interest is waning among both the Japanese public and Samurai Flamenco's allies. Tensions are rising between Masayoshi and Mari, with the latter getting pretty dissatisfied with what she thought was going to be an exciting and varied vigilante life. Even Hidenori is getting tired of the situation, eventually losing his temper with both Masayoshi and Mari, and quitting helping them altogether.

There is a growing and ridiculous self-awareness in Samurai Flamenco. After staggering through an awkward transition stage over the last two episodes, the show about an obsessed tokusatsu fan has transformed into a tokusatsu parody. Masayoshi is fighting near-daily battles with mutated villains with names like Branding Piranha (pictured) and Whipping Walrus. While the tone is a little uneven, particularly in its final minutes - and we'll get to that, it is feeling like it has regained a lot of confidence after shifting the tone and context so significantly.

I'm not certain if it is an intentional criticism of tokusatsu by Samurai Flamenco, but everyone is getting bored with repetitive monster fights. That's the core function of the genre, and yet everyone by poor Masayoshi is losing interest. The fights don't stop. There's always another monster. Tellingly, the only person in the episode to maintain any enthusiasm is a small child in a diner who plays with an improvised Samurai Flamenco toy. Mari has grown despondent, and takes to challenging King Torture via a TV interview with the seedy producer Konno. Hidenori tires of Masayoshi and Mari's fights, and storms off in a rage. For a while during this episode, no one appears to getting on with anyone.

There's another wonderful moment towards the episode's cliffhanger ending. Masayoshi rushes to challenge King Torture as invited, only to find his way blocked by a group of henchmen. He asks them why they want to fight him when he's been invited to meet with King Torture. They blithely respond that they're evil, so fighting the good guy is their job. I really like the way the episode keeps calling out the conventions of the genre and fondly ridiculing them: it's making this weird shift from realism to fantasy ultimately worthwhile.

Mari's challenging King Torture to a fight turns out to be a serious misjudgement. First Konno is captured and tortured, in order to give up Mari's location, then Mari herself is captured and beaten - possibly worse. It's a fairly shocking turn of events for what has been a fairly humorous, light episode. It certainly grabs the viewer's attention, but it feels like a serious misjudgement.

Garish violence against women is unpleasant and unnecessary, and seems to crop up with an annoying frequency in anime. So does 'fan service', the leery displays of female characters' cleavage and underwear intended purely for a seedy male gaze. Seeing both of them presented simultaneously - Mari beaten and bleeding but with overt sexualised cleavage - is really awful to have to sit through, not matter how brief the scene.

Despite these last-minute caveats, "Predetermined Quota" is still a fairly solid and enjoyable episode. Without those final scenes - and it's really an issue of tone over content - it could have been even better. Still, as is it's the sixth enjoyable episode out of nine, giving Samurai Flamenco a quality ratio of 67 per cent.
Posted by Grant at 6:00 PM