The West Wing: "Five Votes Down" 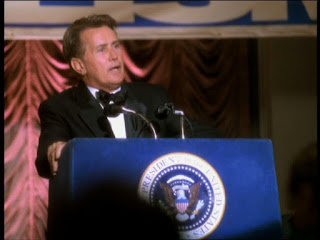 A critical bill to ban a range of automatic firearms unexpectedly stalls, forcing the White House staff to work around the clock to claw back the five crucial votes needed for the bill to pass the House of Representatives. Toby finds himself in hot water over his share investments, and Leo’s marriage crumbles in the face of his duty to the President.

“Five Votes Down” is a significant episode because it is The West Wing’s first proper attempt at basing a story around the American political process. Five votes are needed to get an anti-gun bill passed through Congress, and the episode actually goes some length to show the means by which an Administration will go about securing those votes – and ensuring the bill is passed.

As with “A Proportional Response”, the episode is derived in part from material developed by Sorkin for The American President. The film included an extremely similar anti-gun bill, and depicted a similar race to secure congressional votes to get it passed.

From its inception, one of NBC’s main stipulations for The West Wing was that it must try to show both sides of any political debate. With some issues, this would prove difficult. Co-writer Lawrence O’Donnell explained to the Los Angeles Times ‘if in the script there is an argument about gun control, the most precious document you could produce at The West Wing that week is a passionate, intelligent case against gun control. We know how to do the other one.’(1)

In the case of “Five Votes Down”, NBC’s rule was deliberately broken. John Wells explained to the New York Times: ‘Frankly, no one involved in the program feels there is a logical reason for streets to be flooded with Saturday night specials and automatic weapons.’(2)

One of the many excellent things about this episode is how Sorkin has used the work at hand to further develop character. Josh is firmly established as the President’s ‘attack dog’: not only an operative free to threaten and verbally batter representatives who step out of line, but also someone who relishes the task. His hot-headedness, which formed a core component of the pilot, is cemented here in conversation with Katzenmoyer and Wick. Similarly John Hoynes’ calculated ambition is fully established: he isn’t simply a resentful Vice-President chafing at being stuck one seat away from the top job, he is actively manoeuvring to claim the job in the future.

And of course Leo’s overwhelming dedication to the job is well established as it demolishes his marriage. It’s arguable that there has never been an actor in American television better equipped to look sad than John Spencer: the pain is visible on his face when Jenny leaves him, and the awkward covering-up of the break-up to his staff is heartbreaking to watch.

While the race to pass the anti-gun bill dominates one side of the episode, the other is dominated by Leo McGarry. The constant pressures of political life take their toll, and audiences are battered with a one-two punch: first, we see Leo’s wife leaves him over his failure to place his marriage ahead of the President; secondly, we learn that Leo is a recovering alcoholic. The revelation of Leo’s drinking problems did not form part of the character’s original outline, and was written in by Sorkin on the fly. It caught John Spencer, a recovering alcoholic himself, by surprise. ‘It was weird,’ he would later tell the Rocky Mountain News, ‘I really wasn’t acting.’(3)

‘There are AA meetings going on all over the world, 24 hours a day,’ said Sorkin, ‘so it occurred to me that somewhere, deep in the basement of government, late at night in Washington DC, is an AA meeting for government officials so high profile that they couldn’t possibly go to a regular meeting’(4)

“Five Votes Down” was the first of The West Wing’s episodes with a storyline generated out of the writers’ room. Lawrence O’Donnell Jr and Patrick Caddell collaborated on the plot, with Sorkin developing their work into a script for broadcast.

From “The Short List” to “What Kind of Day Has It Been”, O’Donnell worked on The West Wing as executive story editor. From “In the Shadow of Two Gunmen” he was promoted to co-producer, and then from “The Lame Duck Congress” as producer. He departed the series at the end of the second season, going on to create and produce his own short-lived political drama for NBC, Mister Sterling. O’Donnell returned to The West Wing as a consulting producer at the start of the fifth season. At the start of the seventh, he became one of the show’s executive producers. He even wound up briefly acting in the series, as Dr Bartlet in “Two Cathedrals”.

Prior to joining the writers’ room of The West Wing, Caddell had worked as a political consultant for Outbreak, Air Force One and the made-for-television film Running Mates. During the second season of The West Wing Caddell worked as co-producer. He contributed or co-contributed storylines for another seven episodes of the series, culminating in the second season’s “The Fall’s Gonna Kill You”.

The episode was directed by Michael Lehmann, a feature film director whose works include high school satire Heathers and the notorious Bruce Willis flop Hudson Hawk. Asides from a few other feature film comedies, such as Because I Said So and Airheads, Lehmann has established a career directing television comedy and drama – including episodes of Homicide: Life on the Street, Wonderfalls, The Larry Sanders Show, Big Love, True Blood and Californication. “Five Votes Down” was his only episode for The West Wing.

A technical highlight of this episode occurs before the opening credits have even rolled: a four-minute continuing tracking shot that follows Bartlet and his staff out of a ballroom, down several flights of stairs, through a labyrinth of corridors and ultimately out onto the street and into a motorcade. Multiple overlapping conversations take place throughout, with the camera moving to and from the cast as they walk. The shot required the entire regular cast and more than 500 extras, with camera operator Dave Chameides walking backwards with a heavy Steadicam rig attached to him at the same time. Each take, of which there were more than 13, required one magazine of film. Speaking on the American Society of Cinematographers (ASC) website, director of photography Thomas Del Ruth noted ‘it was about a five-page scene and took us half the night. Dave was walking backwards at full speed for the entire shot; on take 13, he almost collapsed!’(5) The song played at the end of the speech is Barbra Streisand’s “Happy Days Are Here Again”.

Congressman Cal Tillinghouse was played by Michael McGuire, an actor with a career full of one-off and bit parts going back to the 1960s. In 1970 he played Judah Zachary for a 12 episode arc of Dark Shadows. Other appearances included episodes of Columbo, Mannix, Kojak, Hawaii Five-O, The Streets of San Francisco, Women Woman, The Rockford Files, Cagney & Lacey and The Winds of War.

Congressman Mark Richardson was played by Thom Barry. Barry had previously appeared in a 1996 episode of ER, as well as episodes of The Client, Chicago Hope and Seinfeld. In 1995 he had a small role in The American President, credited simply as “Guard”. Barry would return to The West Wing as Congressman Richardson two more times, in “Ways and Means” and “Angel Maintenance”.

Freshman Congressman Christopher Wick was played by Jay Underwood, best known for his childhood performance as Eric Gibb in the film The Boy Who Could Fly. Other roles have included playing Bug in Uncle Buck, Ernest Hemingway for three episodes of The Young Indiana Jones Chronicles, and appearances in The X Files, ER and Star Trek: Voyager. In 1994 Underwood played Johnny Storm in the notorious Roger Corman production of The Fantastic Four. Produced purely to enable Corman to retain the screen rights to the property, the film was briefly released in Italy before being consigned to a future of poor quality bootlegs and Youtube feeds.

Congressman Katzenmoyer was played by Mark Blum. Blum played Edison King in the short-lived David Milch drama Capital News. He had also performed in multiple films and television dramas, including Crocodile Dundee, The Presidio, Shattered Glass and Desperately Seeking Susan, and episodes of Roseanne, NYPD Blue and The Sopranos.

Canadian actress Sara Botsford played Jenny McGarry. Botsford had previously played Ann Hildebrandt on E.N.G. (a role that won her a Gemini Award for Best Actress) and Lilith McKechnie in As the World Turns.

When an actor’s work is submitted for consideration for the Emmy Awards, two episodes will be submitted as an example of their craft. In the case of John Spencer, “Five Votes Down” was submitted along with “Let Bartlet Be Bartlet”. The submission paid off, earning Spencer a nomination for Outstanding Supporting Actor in a Drama Series. Ultimately he was beaten by, of all people, Richard Schiff.