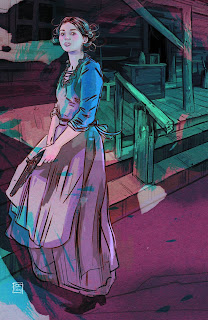 Brian Wood is such an exceptional talent when it comes to historical comics. I still fondly remember his lengthy DC Vertigo series Northlanders, which tracked an unpredictable path through the history of the vikings. Rebels looks set to track a much more focused story, as it follows the lives of newlyweds Seth and Mercy Abbott during the early years of the American Revolution.

This issue splits its focus between Seth in 1775, briefly coming home to Mercy after the costly mission to stop a British advance, and Seth in his childhood, revealing a personal tragedy that helped to form his character. If that wasn't enough, it also sneaks in a real kicker in the form of Mercy's own experience: married, and then effectively abandoned by her husband, and forced to make a life for herself in an isolated cottage in the forest.

Andrea Mutti's artwork and Jordie Bellaire's typically excellent colours help to bring this book to life. It's very easy to make historical fiction drag and seem boring, but they work very well together to bring the story to life.

I think historical fiction is a terribly under-utilised genre for comic books, so I'm pretty happy when a book like this comes along. I'm doubly happy when it's as well written and illustrated as Rebels. We're only three issues into the story: I heartily recommend getting onboard and trying it out. (5/5)

Under the cut: reviews of Copperhead, Descender, FBP: Federal Bureau of Physics and Nameless.

One of the more intriguing characters in Copperhead is Boo, the hairy alien deputy who grumpily resents not being made sheriff. Fans of the character will be delighted with this issue, which pretty much exclusively focuses on him: he's been held hostage by a gang of criminals, and there's no chance of him taking his kidnapping lying down. This is one of those comics that becomes increasingly enjoyable as the characters are developed. The combination of the science fiction and western genres may be on the nose, but Jay Faerber's committed to the mash-up 100 per cent and works his concept for everything it's worth. (4/5)

This is a great fourth issue for Lemire and Nguyen's robot-based science fiction series. The plot progresses, and the characters get more depth as their backgrounds are gradually revealed. More than once with this series I'm getting flashbacks to Steven Spielberg's faulty but worthy film A.I. Artificial Intelligence. This has a very similar protagonist, the boy robot Tim-21, and although the setting is more outlandish it still feels like a very similar exercise: a boy robot who's becoming human. It's all told with Dustin Nguyen's excellent art, which forgoes the inking process entirely and jumps straight from pencils to colours. It gives the whole book a really unique aesthetic that I really like. (4/5)

Things here really do feel like they're building to a series climax. Reality is past its use-by date, amad genius is conspiring to save the rich at the expense of the rest of reality, and a handful of former FBP agents are all that stands between that happening and any chance for the universe. I'm really looking forward to going back and reading this comic from the beginning at some point - I suspect it's going to be a much more satisfying read in collected formats than at a rate of one issue a month. Ponticelli's artwork is expressive, and Michael Wiggam's colours really emphasise its strengths. (3/5)

On the asteroid Xibalba, all of reality collapses in on itself as the survivors of the rescue team struggle to retain their sanity in the face of unimaginable, inexplicable horrors. Or, as Grant Morrison likely calls it, Tuesday. I have been a little ambivalent about this new sci-fi horror miniseries by regular collaborators Morrison and Burnham, but with this issue it all seems to fall into place and feel like the weird, complex sort of science fiction story I expected from them in the first place. This book reminds me in places of The Invisibles and The Filth, which are never bad things to echo. I was curious about earlier issues. Now I'm actively keen to read the final two instalments. (4/5)
Posted by Grant at 7:29 PM