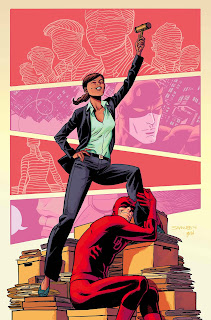 Swings and roundabouts: issues of The Fuse and Daredevil that I intended to review last week have turned up. The latest issue of The Wicked + the Divine, which I intended to reviews this week, has not. My copy of Batman #40 is still lost somewhere, so I'll get to that whenever and however it arrives. In the meantime, let's check out the latest issue of Mark Waid and Chris Samnee's Daredevil.

So in issue #15, Daredevil has been forced to team up with the daughter of one of his enemies - the Owl - to rescue that super-villain from a vigilante hero - the Shroud - that he thought was his ally. Then things go from bad to worse, and by the end of these 20 pages careers are ruined, allegiances have shifted, and the mother of all unexpected cliffhangers arrives to smack the reader in the face.

I honestly think that Mark Waid's run on Daredevil has been pretty much the best run the character has ever had. I know many readers have enormous affection for the iconic Miller and Mazzucchelli run - and rightly so - but this has simply been an outstanding and consistent string of storylines over two volumes and about 50 issues. Waid has never cheated his audience, and every time he's pulled the rug out from underneath it's immediately been accompanied by the simultaneous head-slapping of thousands of readers who should have seen it coming but didn't, because his writing has been so effective and well-structured.

Chris Samnee's artwork is a marvel as well (no pun intended). It's so simple and clean, with outstanding panel layouts: crisp and clear when they need to be, immerse and complex when that would suit the story better. This is the final story arc for Waid and Samnee, and they're going out all guns blazing. I'm really going to miss this comic when it ends. (5/5)

Under the cut: reviews of Dead Drop, Descender, The Fuse, Halogen, and Samurai Jack.

Dead Drop is a new four-part miniseries from Valiant, with each issue presenting a different protagonist, each of whom plays a separate part in a broader story. This issue sees X-O Manowar chasing a young terrorist through New York City in a race to retrieve a deadly alien virus. It's basically a prolonged, enormously entertaining chase scene, peppered throughout with momentary flashbacks and carefully seeded plot exposition. Adam Gorham's artwork is great. Valiant are on such a roll at the moment. They may lack the iconic characters of Marvel and DC, but I swear their quality is not only generally a bit higher than the Big Two, it's also more consistent. (4/5)

Quon finds Tim-21's badly damaged body, and races to salvage him. At the same time Tim-21's consciousness is... somewhere else. How can a robot have a consciousness? How can it dream? Who are the Harvested? Lots of questions come into the storyline with this issue. The series is still a little shaky and uncertain - I don't feel like I've been given quite enough story to hold onto, but I continue to like what I see. Dustin Nguyen's atmospheric art is one of the main draws here: it may be a slightly confused book, but it's a pretty attractive one. (4/5)

"Gridlock" comes to a close with this sixth and final part, The murderer is revealed, and the exact details of their crime revealed. That causes a bit of a problem, since it leaves the bulk of this issue as one massive dump of information on the reader. It's a satisfying revelation, but I do wonder if there was maybe a less dense method of explaining who did it, why they did it, and how. Thankfully the issue picks up in its final pages with some ominous revelations about Dietrich, one of this book's two lead characters. Issue #13, due in August, sounds like it's going to be quite something. (4/5)

If you were a fan of the original television cartoon of Samurai Jack, this well-adapted comic book spin-off will probably make you smile with recognition. The visual aesthetic is translated pretty well to the page, and while Jim Zub's story is hardly the most original thing you'll read it does it's job and is a nicely paced one-shot adventure. I'm still unsure what sort of a market this book has, however: do many kids today still know Samurai Jack? Are there really enough adult readers to make it worth IDW's time and money? This is definitely one of those books to only look for if you're a fan of the show. (2/5)
Posted by Grant at 10:45 PM